Chris and I visited Helmdon, near Brackley,  earlier today. The pupils at the village school were attending a nativity service in the local church so, as our daughter Jacqui is the Head Teacher, we thought we'd show family support. 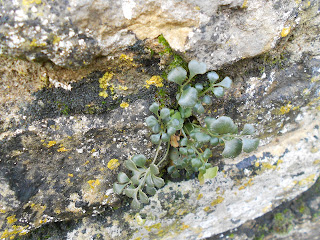 Wall Rue was present in the mortar of a limestone wall in Church Street. About twenty plants were there but, as far as I could see, they were confined to this one location. The leaves of this fern look a little like the true Rue (Ruta graveolens), but there the resemblance ends. It is not an exciting plant! 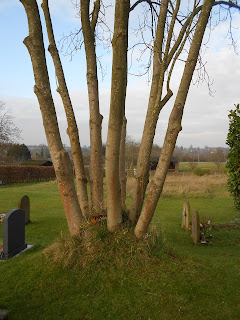 There was time for a stroll around the churchyard and there I came upon quite an impressive Ash Tree. At some time the tree had been cut off at the base, i.e. it had been coppiced, and eight strong branches now grow from the stool. (My photograph appears to show only seven, but I counted eight.) It would be very sad if Ash Dieback led to its demise.


However, this tree was as nothing when compared with a Yew close to the church itself. I roughly measured its girth at head height and made it about ten metres. According to a notice in the church, following numerous calculations the conclusion had been reached that it was 1,700 years old. I have to say I'm very sceptical about such a date as it would mean that the tree predates the church; a medieval date would seem more likely. One interesting feature was that the tips of many hundreds of branches bore "Pineapple Galls". These are caused by a gall midge, Taxomyia taxa. It is not uncommon but I have never before seen a tree so infested. Strangely, several other Yews nearby showed no sign of galling. The lower photograph shows - not very clearly - a couple of affected shoots. 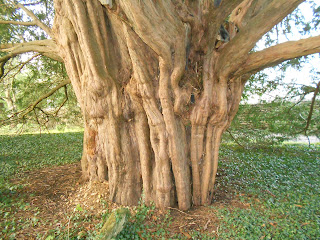 Trees of this age are often hosts to unusual invertebrates including spiders and false scorpions so I may try to return there next summer for a closer look. 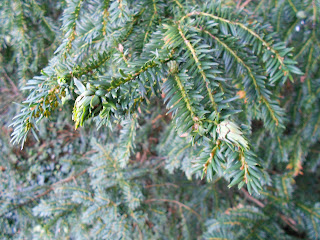