The very cold conditions of recent days have been brought to an end by heavy rain, so heavy in fact that several roads in this area were impassable by late evening yesterday. 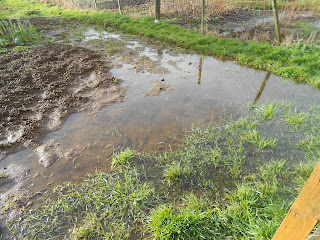 I took a stroll over to Byfield allotments earlier today, but not before observing a group of about a dozen Long-tailed Tits working their way through a Hawthorn tree in our back garden. They at least have passed the first icy ordeal of winter. Many of the allotment plots, as shown in my photograph, were badly flooded. This is a frequent occurence on this low-lying land and, not for the first time, I was glad that I'd given up my own plot a couple of months ago.


On the roadside  adjacent to the allotments a 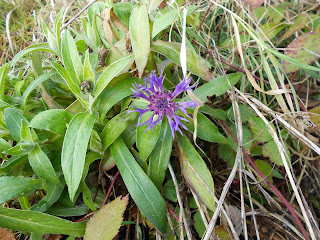 clump of Perennial Cornflower was in flower, defying the elements.  This is not native to Britain but is widely naturalised on rough ground, having been thrown out from gardens, where it can become invasive. To me it is the cottage garden flower par excellence. 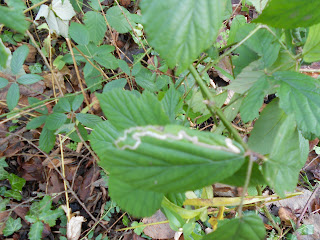 My walk took me back via the Pocket Park
where, even in miserable conditions, there is usually something of interest to be noted. Today my attention was caught by a leaf mine on a bramble. It was formed by the larva of a Glossy Bramble Pygmy Moth, a tiny moth with the inordinately long name of Stigmella splendidissimella. The windy conditions made photography awkward so I re-photographed the leaf at home.

Identification of these leaf miners can be tricky but the food plant, the shape and position of the mine and the distribution of the frass are all helpful.("Frass" is the name used by lepidopterists for the excrement of insects.) The insect egg has hatched towards the left of the leaf. The larva has then eaten its way towards the right - with the mine getting steadily wider as the larva grows - and has emerged at the leaf edge on the right-hand end of the leaf. 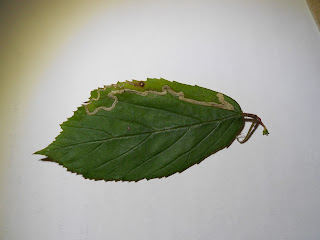