To Daventry earlier today (7th December). Passing through Charwelton I noticed rooks fussing around their nests but they will not start breeding yet as the first clutches of eggs aren't normally laid until March. A nearby field harboured a number of Fieldfares - maybe 40-50 - but their close relatives, Redwings, did not appear to be present. Both these species of thrush arrive in considerable numbers from northern Europe and will stay with us until March/April.

On the Daventry bypass there are several gorse bushes. It may be approaching mid-December but their yellow flowers were in evidence:


Kissing's in season when the gorse is in bloom.

When gorse is out of blossom,


There are several variations on this, all recognising the fact that gorse is always in bloom. Oddly, although John Clare makes several references to it in his poems, he fails to mention this ever-flowering habit.


Near to Daventry library the unmistakeable Caper Spurge, Euphorbia lathyrus, was present in a flower border. 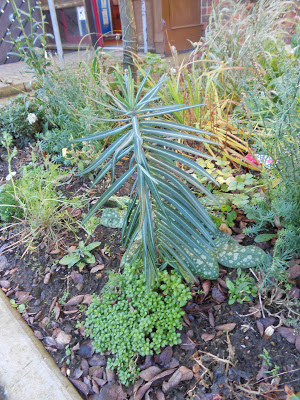 With its oddly stiff habit it somehow looks alien - and indeed it may not be a native to Britain - but it is widespread and familiar to gardeners (indeed, my excuse for including it here is that it is present in my Byfield garden). Its fruits look vaguely like culinary capers but all spurges are poisonous, some dangerously so. If it has a use it is only as a mole repellant, but evidence that it is at all effective is hard to find.

* The spelling 'lathyris' is sometimes used.