When icicles hang by the wall...


As kids we had to learn extracts from "Love's Labour Lost" and I can still recall most of this famous poem. I was reminded of this on my walk earlier today when I saw some Crab Apples hanging from a branch.

When roasted crabs hiss in the bowl... 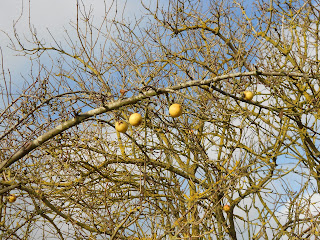 I always assumed that the setting was a cottage by the sea and the crabs were the familiar marine crustaceans; my teacher never explained that they were Crab Apples and for some years I remained in blissful ignorance. All very confusing. I would have been further puzzled had I been familiar with a line from John Clare:

And crabs sun-reddened with a tempting cheek.

Even more confusing is the identification of these wayside specimens. The true Crab Apple, Malus sylvestris, is quite common but I suspect that many records may be in fact be examples of Malus domestica. Clive Stace, in his "New Flora of the British Isles" (1991) says [Malus sylvestris is] ... "much over-recorded for Malus domestica". These will have grown from apple cores casually flung aside by walkers. Crab Apples are usually - but not always - spiny; "domestic" apples never are. 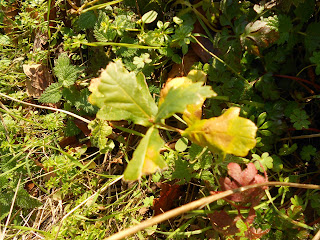 I was pleased also to see several oak seedlings in a hedgerow forming one border of the Pocket Park. Earlier this year a group of us planted a "Jubilee Oak" in the P.P. so, in one way and another, there should be numerous oaks for future generations, compensating for the likely loss of many Ash trees.

Quite a few flies were on the wing along a south-facing line of shrubs. Most were Anthomyids, commonly known as...er...Anthomyids. They are very tricky to identify; I can't do it, and I don't know many people who can. I had more success with a Tachinid fly, Macquartia grisea. This species is parasitic on certain beetles and is not uncommon. However I was very surprised to take a specimen so late in the year. [For the enthusiast this fly has: a dusting of hairs on its face on either side of the antennae; bright yellow calypters and halteres; hairs on the radio-cubital node and crossed apical hairs on the scutellum.] For the non-enthusiast it is a very ordinary-looking fly superficially like a House Fly - but it pleased me! It was the 431st insect/spider I've now recorded from the Pocket Park; to be still adding species in mid-December is very gratifying.
Posted by Tony White at 06:51