With a little human encouragement we now have quite a few teasel plants in our pocket park. Flocks of goldfinches frequently pass through and with their delicate bills they are adept at tweaking the seeds from the teasel seedheads. This year however they have missed some seeds and in the wet conditions a number of them have germinated before becoming detached from the plants, forming what botanists refer to as proliferous seedlings.  My photograph, taken earlier today, shows one such seedhead, but a number were similarly affected. 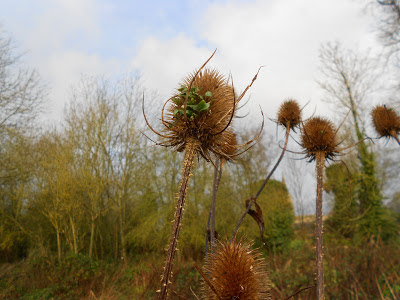 Some plants such as the Alpine Meadow-grass Poa alpina depend almost entirely on this ploy to produce new plants; in other species it is a less frequent occurrence. In theory some of these teasel seedlings will drop to the ground and root but the odds are surely stacked against this happening. What a contrast this autumn has been to the baking conditions described by John Clare in his poem Noon, written in 1820:

By the hot relentless sun
E'en the dew is parched up
From the teasel's jointed cup.
Oh poor birds where must ye fly,
Now your water pots are dry?

He refers here to the paired leaves of the teasel which form a water-holding structure but I have never seen birds making use of these tiny reservoirs. The jointed leaves are apparent on the plant in the foreground of the picture below - a photograph taken earlier in the year. 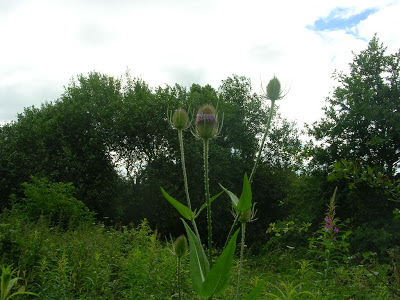 The teasel, Dipsacus fullonum, gets its name from past use by fullers, who would make a brush from the prickly seed heads and so tease the surface of cloth to produce a nap. It was once regularly used to raise a nap on snooker tables. In most situations teasel heads have been replaced by other devices but for very fine cloth - including, I believe, the uniforms of the Household Cavalry - it is still used.
Posted by Tony White at 09:04