There are a couple of Spindle (Euonymus europaeus) bushes in the Pocket Park. It is a shrub native to Northamptonshire but in the south-west of the county it is far from common and our specimens have been planted. Druce's 'Flora of Northamptonshire', published in 1930, includes a record of it from Charwelton and I recall seeing it between there and Woodford Halse earlier this year. Its distinctive fruits are generally described in books as 'sealing-wax pink' and I couldn't argue with that. 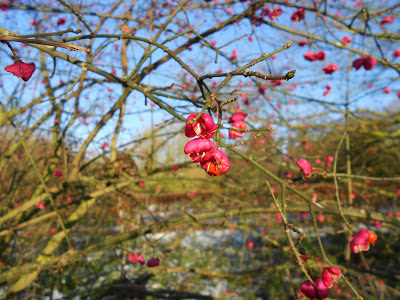 One of the two shrubs has been stripped of its fruits by birds but, as my second photograph shows, the other specimen still has plenty on offer. 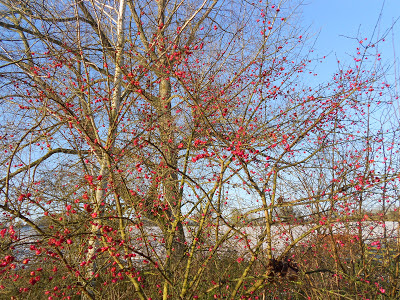 As I approached the Pocket Park a number of Fieldfares flew off with a peevish 'chak-chak'. These winter visitors from Scandinavia and eastern Europe were feeding on hawthorn but the resident Blackbirds will account for most of the fruit. There is a decent drop of haws but they have not been as plentiful as last year, when the bushes were heavily laden. My third picture, from 2011, shows Common Hawthorn, Crataegus monogyna, but the Pocket Park has one specimen of Midland Hawthorn, Crataegus laevigata. 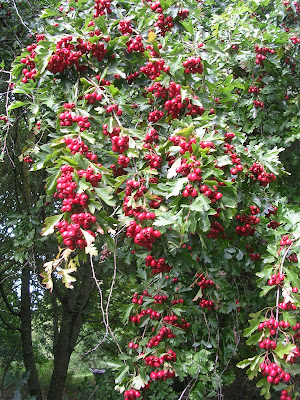