For obvious reasons the Stinging Nettle is one of the first plants we learn to recognise in childhood. Their Latin name is Urtica and David Bellamy would jokingly claim that "They're called Urtica because they 'urt you". There are two species native to Britain but by far the best-known is Urtica dioica. Both are armed with stinging cells but these do not seem to greatly deter animals from eating the highly nutritious leaves. A specimen I photographed near to the Village Club had been attacked by two different species of insect. The pale 'blobs' in the centre are galls caused by the fly Dasineura urticae; the grey patch on the lowest leaf is a mine caused by another fly, Agromyza anthracina. Both are common and widespread insects but the adults, being tiny, are not often noticed. 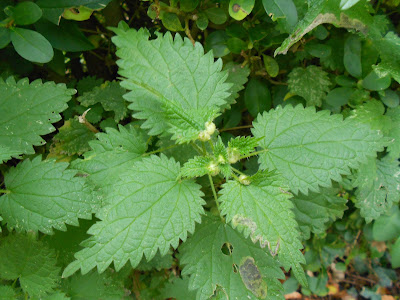 Nettles often colonise waste ground, apparently because the soil is rich in nitrates. Abandoned gardens are such a site:


"Yon nettles where they're left to spread
There once a garden smiled."

Books on wildlife-friendly gardening often suggest leaving a patch of nettles in a corner of the garden, but there really is no point. The plant is abundant everywhere and our gardens can be put to better use. I warmly recommend a book, "No Nettles Required" by Ken Thompson (Eden Project Books), which looks at the subject in a balanced way and comes up with far better ideas.