On a foggy 15th November I took a stroll through Byfield Churchyard to gather some twigs from a yew tree (don't ask - it's too complicated!). A row of rather fine Lawson's Cypress trees line the western edge. This species often supports quite a lot of wildlife, unlike its notorious relative "Leylandii", and with this in mind I shook a couple of branches and was rewarded with a specimen of Juniper Shieldbug, Cyphostethus tristriatus. 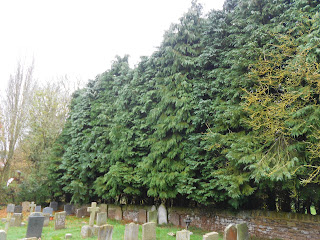 In the 1950's this discovery would have been met with considerable surprise; Juniper Shieldbug was then a distinctly uncommon insect, being confined - as the name suggests - to juniper bushes, mostly in southern counties such as Surrey. Then, at some time in the 1960's, it "discovered" Lawson's Cypress and it's subsequent spread has been rapid.
My photograph, taken a couple of hours later, clearly shows the distinctive pair of brown, boomerang-shaped marks on the insect's back. 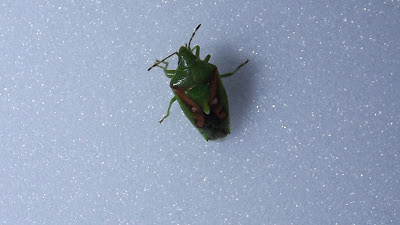