A few years ago, when Chris and I moved into this property, the garden was...well, let's say it needed a little t.l.c. As the clearance work got under way I was pleased to find a solitary Hart's Tongue Fern Phyllitis scolopendrium (= Asplenium scolopendrium) in a crevice. Now, some 7-8 years later, there must be a dozen along the banks of the stream - the Bell Brook - which forms one border of the garden. Unfortunately, following prolonged and heavy rain yesterday, during which time the stream rose by over two feet, most of the plants are now under water! 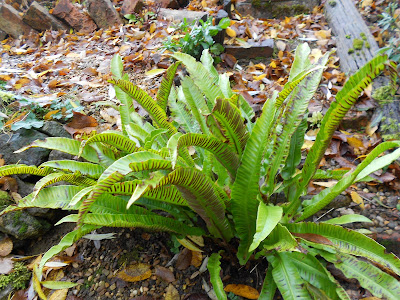 When George Claridge Druce wrote "The Flora of Northamptonshire" back in 1930 he described this fern as 'local and decreasing'. He did record it from Eydon but nowhere else in this area. It is now frequent to common around here, including the pocket park. How nice to be able to record a native plant that is flourishing.
My photograph clearly shows the brown stripes on the back of the fronds; these are the sori, producing the plant's spores. The stripey effect resembles the legs of certain centipedes and indeed this plant's specific name, scololopendrium, comes from the Greek skolopendra - a centipede.

In my 1923 copy of "Potter's Cyclopaedia of Botanical Drugs" recommends a preparation of this plant for 'removing gravelly deposits in the bladder'; I'll bear that source in mind. It will save a trip to Travis Perkins.
Posted by Tony White at 06:02