In early January, about five years ago, I took some mistletoe berries and pushed them into crevices on our apple tree. Only one germinated but is now growing strongly. It is a hemiparasite; its green leaves do function but their photosynthetic activities are  not adequate to support the plant, hence the need to "tap into" a host. The best-known host of mistletoe is apple, but here in Northamptonshire (where it is rare and only known from about ten locations), it is usually found on lime trees, although I have noted some on False Acacia in Northampton. 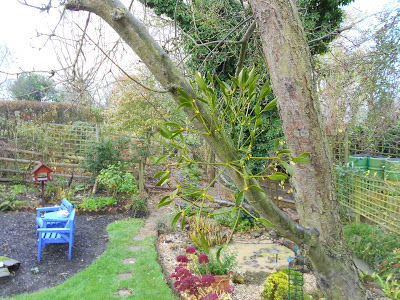 Mistletoe's Latin name is Viscum album and the generic name refers to the viscous nature of the seeds. They are extremely sticky and will adhere to the beak of a bird such as a Mistle Thrush, which will then go to a nearby branch are wipe them off. With luck the branch will be that of a suitable host plant. The specific epithet 'album' refers of course to the white berries. Some of its relatives from warmer countries have red fruit and one highly speculative idea is that the story of 'Moses and the Burning Bush' in the Bible (Exodus 3, 1-15) refers to a bush covered in scarlet mistletoe berries.

We would wait in vain for berries because, like holly, mistletoe is normally dioecious so we would need a male and a female plant.
Posted by Tony White at 11:27