Walking off the Christmas calories


At this time of the year a long country walk may be very pleasant but, if the aim is to see interesting flowers and fruit, an urban walk can be more rewarding - and less muddy!

Today, the weather being dry and mild, I set off walking from home, further familiarising myself with those parts of the local area which I rarely visit. My target was an area called Grovelandsa, together with the land immediately beyond.

Barely a hundred yards from home a clump of Pot Marigolds, Calendula officinalis, had braved the winter weather (such as it was) to put on a bright display. Easy to grow, flowering for months on end and attractive to insects, what's not to like? They really ought to feature in our own garden.
﻿

An old fence had been attacked by Coral Spot, Necria cinnibarina. This is so common that it rarely gets a mention but it is rather important in being one of the first species to begin the job of decaying old wood, thus returning its nutrients to the soil.

An old stump was displaying a rather different fungus which I believe to be Velvet Shank, Flammulina velutipes.


At this point, with three days to go, I am making a New Year's Resolution: I must not allow myself to be sidetracked by fungi.

A couple of minutes later I found myself at the aforementioned Grovelands. It is a residential area of neatly maintained gardens which are, for the most part rather dull. But I live in hope.


A hedgerow of a berberis species was displaying flowers. From a distance their rich egg-yolk coloured flowers and the neat holly-like leaves suggested Berberis darwinii, a suspicion confirmed by a closer examination. 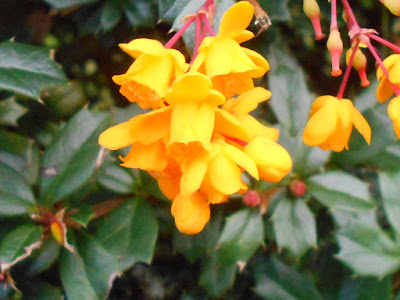 This lovely shrub hails from the southern parts of Chile and Argentina, and was awarded the Royal Horticultural Society's A.G.M. back in 1930.


Although several species of Berberis live in South America its generic name is a Latinised form of the Arabic name for these shrubs. (Note that although it was named after Charles Darwin, his name, being the specific epithet, is not given a capital D.)

It is in this area that I have found Spurge Laurel, Daphne laureola, on previous walks. I was hoping that any specimens might just be in flower given that this has been a very mild winter. I had no luck but I did find this lovely Eucalyptus gunnii, its bark peeling away in strips to show the beautiful bark below.


﻿
Although I have stated that this specimen is E. gunnii I have to put in a caveat: eucalypts (as they are known) have a strong tendency to hybridise so we cannot be 100% sure what we are looking at.

The trees proved to be worth more than a cursory examination, for on the mossy trunk of a nearby lime tree a specimen of Western Polypody was growing as an epiphyte. This fern, Polypodium interjectum, is the most likely of our three polypody species to be found in an urban habitat. The plant was growing at a height which made a photograph difficult but I've done my best.

On waste ground a little further on Hedgerow Crane's-bill, Geranium pyrenaicum was present. Is it native to the U.K. (and does it matter)? It has been around in Britain for 350 years and in Northants since at least 1874  so it is well established, but I only ever find it on waste or disturbed ground.


It is a pretty thing so may well have been introduced as an ornamental plant but we will probably never know.

Apart from that, about the only thing in flower was a Wrinkled Viburnum, Viburnum rhytidophyllum. Its flowers were nothing to write home about but any flowers at this time of the year are to be welcomed.

More interesting than the off-white blossom is the foliage. An alternative name for this shrub is the Leatherleaf Viburnum, and the rugose, semi-glossy leaves of this Chinese introduction are certainly distinctive. Its specific name comes from the Greek, rhytis meaning a wrinkle, thus rhytidophyllum means 'wrinkled leaf'.

So, although nothing spectacular was noted I returned from my three-mile walk feeling fresher than when I had started out, with a few cobwebs blown away.