A chink of light

We again awoke to freezing conditions, but a subtle change was under way. The first hint of (relatively) warmer conditions was fog shrouding the landscape abetted by the wind or, I should say, lack of it. Snow still blanketed the ground but, very slowly, the temperature began to creep up. A sudden rise would have been welcomed by wildlife, exposing food sources; it would have had potentially serious consequences for humans as flooding would have become a real danger. In fact the rise was only in the region of two or three degrees, just enough to take us above freezing point, for a slow thaw to begin and for each icicle to bear a dew drop on its nose.
The conflict between fieldfares and blackbirds was resumed and seems set to continue until former can return to open countryside.
The bitingly strong easterly winds have created snow drifts in many places but here in the relatively sheltered back garden our various pots have been given saucy white hats some six inches high.

Beneath this bizarre, almost Rastafarian headgear tulips are snug and, tempting though it is to knock away the snow I'll leave things for nature to take its course. 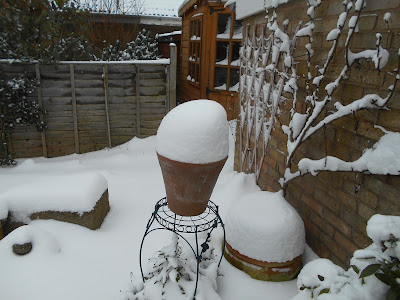 The alpines in their troughs are perfectly safe in the back garden but the cacti in the front, sitting incongruously in snow, may be a write-off. I cling to the hope that, as they have a rather woolly coating, they hail from a mountain region in, perhaps, Bolivia or Argentina. Although I have tried to give them well-drained conditions it may be the wet soil that finally does for them.