No, no, no - not Nigella Lawson! Actually there is a culinary connection and I'll deal with that shortly.
I am referring to Love-in-a-mist, Nigella damascena. This pretty blue-flowered (occasionally pink)annual was present in our front garden when we moved here some three years ago. Every spring I pull out dozens of seedlings; every year more appear. I don't mind as long as they don't get out of hand. 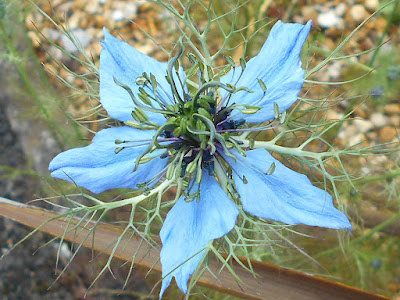 This member of the Buttercup family, Ranunculaceae, is widespread around the Mediterranean but, despite its specific name, it has no particular association with the Damascus region and this may instead refer to damask, the 'petals' and fine leaves suggesting a fine textile fabric. As for the generic name, Nigella, this is from the Latin niger, black, and refers to the colour of the seeds. Like so many of the buttercup family such as Clematis and Anemones, what appear to be petals are coloured sepals; the true petals of Nigella are tiny and not noticed unless a flower is closely examined. Instead they serve as nectaries, thus attracting insects.
The upper leaves of the plant are very finely divided, forming a misty whorl around the flowers and giving rise to the common name and also an alternative, Devil in the Bush. These leaves are more clearly shown in the second photograph.
Although not native to Britain it has escaped from gardens and now has some self-sustaining populations on areas of chalky, dry soils. In fact it was once a cornfield weed in some parts of Britain but modern herbicides have put paid to that. 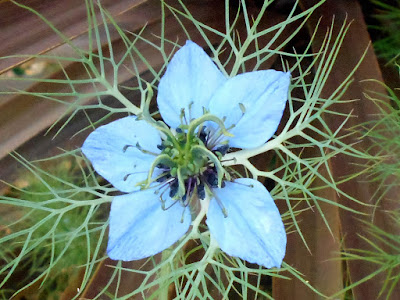 Like most members of the family Nigella may have toxic properties. An alkaloid, damascenine, is found in the tissues and is under suspicion but this hasn't prevented the seeds, held in a large, inflated capsule, from being used in cooking, although the ones normally used are from a close relative, Nigella sativa.

The dried seeds are added as a spice to some Indian and Middle Eastern dishes, when it is given various names such as Black Cumin and Roman Coriander. Some regard the flavour as rather similar to nutmeg.
Occasionally one sees the Spanish Fennel Flower, Nigella hispanica, being advertised. It is said to have 'the most spectacular flowers' of the genus. I have yet to see it grown but may treat myself to a packet of seeds for next year.
Posted by Tony White at 09:04