Bees tend to get only a passing mention in my blogs. Not that I regard them as unimportant - far from it - but because I find them quite tricky to identify. It is easy if you have a dead specimen in front of you for then the finer details may be examined, but when they are restlessly going from flower to flower it is a different matter and, given the plight faced by many bees, I am loth to kill one simply to identify it. I suppose also, what with spiders, bugs and two-winged flies, I don't put in the time required.
Of course some are straightforward, like this Buff-tailed Bumble Bee, Bombus terrestris. The large queens are often about by mid-February and this early emergence and, of course, general appearance make it familiar to most gardeners.
﻿

Another common bee of quite distinctive appearance is the Red-tailed Bumblebee, Bombus lapidarius. The head and thorax are all black but the tail is orange-red and covers less than half of the abdomen. It is currently enjoying the cushions of thyme in our front garden.
﻿

A very frequent visitor to our garden is the Tree Bumblebee, Bombus hypnorum. First recorded in Britain (Wiltshire) in 2001  it has since been expanding its range rapidly, and is now known from Scotland and even the islands off the west coast. Despite its association with trees it is commonly seen in gardens. Its unique combination of gingery thorax and black, white-tailed abdomen make it difficult to confuse with other species. I photographed this specimen on bramble flowers in Daventry town centre.
A  bee with a very neat yellow 'collar' and a largely hairless thorax was on dwarf scabious, Scabiosa columbaria, in our front garden. This was a Field Cuckoo Bee, Bombus campestris. It  had an off-white tail (not really obvious in the photograph) and just a hint of white at the scutellum. One feature of a cuckoo bumble bee is the lack of corbiculae (pollen baskets) on the hind legs. 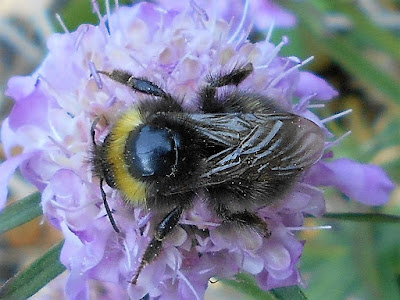 They are social parasites of other bees and apparently, in the case of the Field Cuckoo Bee, the victim is usually Bombus pascuorum.
﻿

As for the 'domesticated' honeybee, Apis mellifera, this can generally be recognised with ease. The colour can be variable, with pale and dark forms available, the result of beekeepers importing queens from various countries (and sometimes inadvertently importing disease). Some species of Melitta could cause confusion but the 90 degree bend in the antennae of the true honey bee rules those out. The photograph shows what I regard as a typical honey bee and the bend in the antenna is obvious. There is a British 'native' bee, generally black and virtually extinct. There are some remaining colonies on certain Hebridean islands and the importation of other strains of honey bee there is banned.
Of course, bee-mimicking hoverflies are there to sow doubt and confusion; I frequently see these two-winged flies featured as 'bees' in television gardening programmes. Species of Eristalis are the usual troublemakers and a male Drone Fly, Eristalis tenax has regularly been joining true bees on our thyme.
There is no doubt that bees are very interesting - and important to us - but I'll stick to spiders, bugs and flies.