The local Wildlife Trust holds an annual Bioblitz. A site is selected - ideally one which is suspected of being rich in wildlife but has been under-recorded - and the county recorders are encouraged to go along and survey the group or groups of organisms in which they specialise. I estimated that between twenty and thirty turned up and birds, butterflies, diptera and, of course, the flora were surveyed. For my part I tried to concentrate on spiders and true bugs, but inevitably other organisms were encountered. 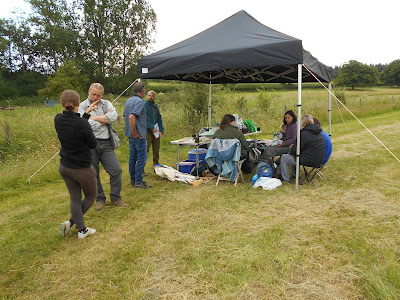 The site looked promising and the flora showed the value of traditional management techniques. Selfheal, Prunella vulgaris, was common, as it is on suburban lawns.
Perhaps I should refer to it as Common Selfheal since a close relative, Large Selfheal, Prunella grandiflora, has become naturalised here and there in Britain. More interesting was Betony, Betonica officinalis. This is a good indicator of ancient grassland and, with the loss of this habitat, it has become scarce in Northamptonshire. It is quite closely related to Selfheal, both species being members of the Mint Family, Lamiaceae and the word Betony comes from the Spanish word Vettonica. The specific name officinalis translates as 'sold in shops' and refers to the plant's use by apothecaries.
Another interesting plant in the meadow was Dropwort, Filipendula vulgaris. It is a further species not often seen due to loss of habitat and is found in fewer than ten sites in the south-west of the county.

I will restrict my botanical observations to one more plant: Yellow Rattle, Rhinanthus minor, is a hemi-parasite of great importance in the maintenance of flower-rich meadows. At first this seems a strange idea; why should a hemi-parasite be of value? This plant, a member of the Orobanchaceae Family, has green leaves and so is able to photosynthesize, but supplements its food by tapping in to the roots of grasses. This reduces their vigour and so allows other plants to flourish, plants that otherwise be crowded out and in meadows across Britain this species is being introduced in seed mixes to allow these areas to return to their former glory.
﻿

It gets its curious name from the inflated seed capsules in which the ripe seeds will rattle when shaken but in Herefordshire and adjacent areas it is known as rochlis, the death rattle - a strange name for a plant which encourages so much life.
Recently I have been bemoaning the dearth of butterflies in the Daventry area. Here they were present in their hundreds and the lepidoptera recorders probably had a good day. I was concentrating on other groups but there was time to photograph this Ringlet, Aphantopus hyperantus.

The weather was kind, being warm and sunny but a blustery wind tested one's netsmanship; one false move and it could be turned inside-out, freeing the contents. Nevertheless I took quite a good haul and I left, content, even though several recorders were still busy about their business. A brief but heavy shower arrived as I departed, probably signalling the end of the day's activities for all.
﻿

Postscript
For the record, my eventual haul was 47 species. These included 11 arachnids (spiders and their kin), 36 insects, including 10 bugs, 6 beetles and 18 diptera (two-winged flies). There was also one crustacean - a woodlouse. The total would probably have been higher but a ditch, normally a very productive habitat, was without water, being just a little damp at the bottom.