Alder - but no wiser

Earlier today I walked through what was once Stefen Leys Pocket Park. It is now just an open space owned by the local authority but is still a pocket park in all but name.
It boasts a small pond which, lacking proper management, has become overgrown by Yellow Flag, Iris pseudacorus, so that, from a distance,the pond can barely be seen. Normally, in spring, this pond is full of frog spawn but what happened this year I have no idea as I failed to pay it a visit. 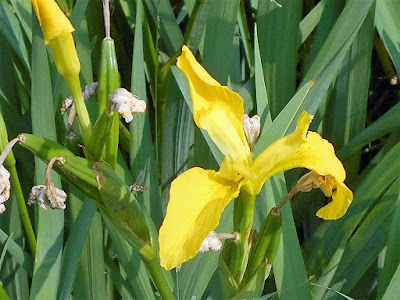 The irises are attractive but the most interesting feature at the pond margins is an Alder, Alnus glutinosa. A quick glance shows nothing of interest but I, thirsting for spiritual enlightenment, took a closer look. The obovate leaves, for the most part, were normal, but some had been galled by a mite, Aceria nalepai. The galls, always situated in the angles of the leaf veins, are very distinctive and the mite is a widespread one.
Even more interesting however were the female catkins. These are not the usual lamb's tail shape of, say, a male hazel catkin, but are short and barrel-shaped. Something in the order of 10% had been attacked by a fungus, Taphrina alni, known as Alder Tongue. The name is very appropriate for the fungal body protrudes from the catkin in a distinctly insolent manner. The example photographed has a pinkish hue but this may darken to a red or even purple over the next few weeks.

Once very rare and confined to Cornwall it has, in the last sixty years, spread across much of Britain. A little later in the day I examined a grey Alder, Alnus incana, and it showed no sign of the fungus.
What else did the park have to offer? Half a dozen Shaggy Parasol mushrooms, Chlorophyllum rhacodes, grew in the grass. 'Edible and delicious' is Paul Sterry's view in his Fungi of Britain and Northern Europe' but Roger Phillips' view - Mushrooms  and other fungi of Great Britain and Europe - is 'Edible, but may cause gastric upsets'.  Needless to say, I gave it a miss.

And then there was the bee in the trumpet flower of Hedge Bindweed, Calystegia sepium. Except, of  course, that it wasn't a bee at all but a Narcissus Fly, Merodon equestris. Unlike a bee it has two wings rather than four. The eyes are separated by a small gap and show that the specimen is a female. The fly is obviously a bee-mimic but comes in several colour variations, so it can in effect mimic several bee species. The one I photographed is var. validus.
﻿

So, as I say, the area is no longer a pocket park but, despite the little dumps left by dogs (to be fair, these dumps are getting less common), there is much of interest to be seen there. Perhaps I should pay it a little more attention.