bedraggle to soil by dragging in the wet or dirt. OE dragan; to drag


Today, Thursday, 8 June, has been dismal - as have the last four or five days. Flaming June? Flaming 'eck as like.
Undaunted, I strode forth during a break in the rain in the direction of Kentle Wood (Ed. Fibber! You went in the car!) only for the rain to return shortly after I'd straddled the stile at the entrance. Bees had donned their fur coats and were also out and about, with this Buff-tailed Bumble Bee clinging in the blustery wind to a hogweed umbel.

Several of these same umbels were being visited by specimens of Volucella pellucens. It is a regular patron of hogweed although bramble flowers are visited too.
A few micro-moths were also braving the rain, although as it increased these disappeared. Notable among these were several specimens of Nemophora degeerella, with the male antennae almost four times the length of the forewings. Its common name of Yellow-barred Long-horn could hardly be more descriptive.

Common too was the Yellow-spot Tortrix, Pseudargyrotoza conwagana. Its main food plant is ash, a tree which is present in Kentle Wood in (unnecessarily) large numbers. I have commented before on how the length of the Latin name appears to increase as the specimen in question gets smaller. The examples I took measured a mere 5-6 millimetres. 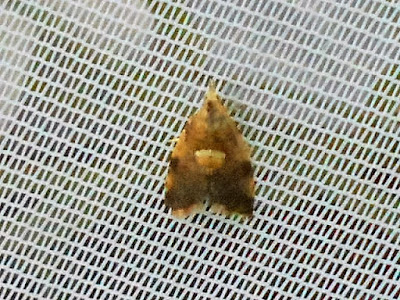 I did not see these very variable moths until I checked the contents of my increasingly damp sweep net, finding dark and much paler specimens.
Seeming unbothered by the conditions was this rather handsome soldier beetle, Cantharis rustica. It can just be seen from the photograph that the femora ('thighs') are reddish, helping to distinguish it from the black-thighed Cantharis fusca. As I have commented elsewhere (blog, 1 June) these beetles were invariably - and unjustifiably - known to us as kids by the general name of 'bloodsucker'.

By now quite bedraggled I turned towards the exit, ducking under a tree to photograph the common sawfly, Tenthredo mesomela. It is surprising that such a widespread insect appears to have no common name. Sawflies generally need an expert for identification but as it happens, this species is very distinctive.
Near the entrance, on disturbed ground, were several plants of Common Fumitory, Fumaria officinalis. Rather absurdly, I am always pleased to find this plant, common weed though it may be. The finely divided  leaves are often greyish, looking from a distance like a wreath of smoke, thus giving rise to its common name.

Its racemes of delightful, purple-pink flowers would surely make it a much-prized plant - if only they were much larger. The flowers are visited by species of small bee but failing that, they are self-fertile. I have never witnessed an insect visitor on fumitory and in the increasing rain this clump wouldn't be getting a visitor in the immediate future so I didn't hang around. Home and a cup of tea was my aim.