My last blog, 'Winter Pollination,' had largely concentrated on yellow flowers currently in bloom. I omitted mention of the Pot Marigold, Calendula officinalis, as it is not a true spring flower but is a species still in bloom from last summer. This long period of flowering is alluded to in its name as the Latin calendae is the first day of the month and the day on which interest is to be paid; sometimes the payment of interest, it seems, takes a long time! And it will come as no surprise to find that the vernacular name refers to the Virgin Mary and the word gold. Marigold scrambles through a fence not far from our house, with frost and biting winds rendering it progressively more tatty.  This plant is not to be confused with species of Tagetes, known variously as French Marigold, African Marigold and so on. 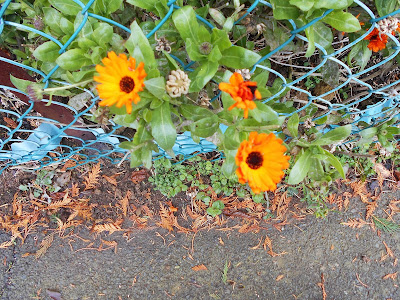 It probably originated in southern or south-east Europe but has been introduced to so many other regions, often escaping, that its range as a wild plant has been obscured.  It was one of those plants which, although originally introduced by apothecaries as a medicinal plant, soon became grown for its aesthetic qualities. (Feverfew, Tanacetum parthenium, probably has a similar history.)
The Pot Marigold has been valued for centuries and my old copy of 'Potter's Cyclopaedia of Botanical Drugs and Preparations' (1923 edition and therefore almost a century old) refers to it as a stimulant and diaphoretic, the latter word referring to its ability to induce sweating. Here in the 21st century an oil extracted from the plant is still much valued in the field of alternative medicine.
A closely related species is Calendula arvensis, rather like a scaled-down version of C. officinalis and a species which I frequently find in arable fields in southern Europe. I was intrigued when I opened my copy of Potter's Herbal and the following newspaper cutting fluttered out: 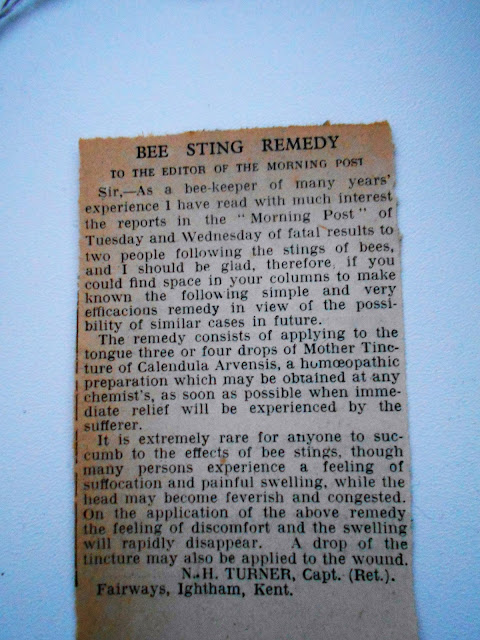 I have so far been unable to date this cutting but I suspect it is from the 1930's. The Morning Post amalgamated with The Daily Telegraph in 1937. I tracked down an entry in the journal 'Bee World' for June, 1939 which informed us that 'Captain N.H.Turner is resigning from the editorship of Beekeeping prior to his departure for Canada'. Captain Turner's assessment of bee sting deaths as 'extremely rare' needs to be treated with caution. I do not have the latest statistics but government figures state that in 2010 five people in the U.K. died by being stung by 'bees, hornets or wasps'.


Well, I seem to have drifted a little off topic but the history of the Pot Marigold - and its relatives - is an intriguing one. It is now available in a wide range of sizes, colours and flower form and is worthy of a place in the garden, although I personally try to avoid double flowers ('flore pleno') as they are of little interest to insects.
There is a lot more to this popular little annual than meets the eye.