About five years ago a rather large tree of Common Lime, Tilia x europaea, growing on Byfield's playing fields, was cut down for, as far as I could see, no obvious reason. It left a stump about one metre high. 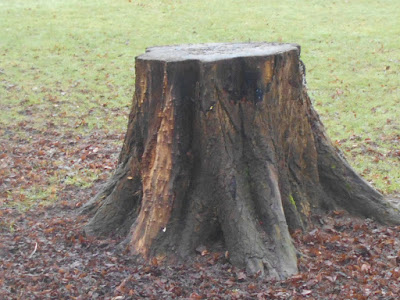 It would inevitably be attacked by fungi; it was just a matter of time and on a visit today it could be seen that the attack was well under way. The species involved was Trametes versicolor, aka Coriolus versicolor. The fruit body is often distinctly marked with concentric rings in brown, cream and buff , giving it the common name of Turkey Tail, but it is very variable.
﻿

In the specimens in question the fruiting bodies were fundamentally grey but with a distinct edging of white. It is extremely common and could be regarded as the most widespread of all Britain's macro-fungi clearly playing a major role in the decomposition of many woodland trees.

But chemicals contained within this fungus are also under investigation for the prevention of cancer recurrence.
On a completely different issue I noticed that the berries of Stinking Gladdon, Iris foetidissima, growing nearby, appeared to be untouched. Although we have only had one snowfall this January there have been some very sharp frosts.

The berries of this iris are, with their bright orange-red colour, clearly designed to attract birds and this dispersal strategy seems very effective, with plants widely scattered both in Byfield and in Daventry. Nevertheless it seems clear that these berries, frosts or no frosts, are only taken after more palatable options have been exhausted. In Northamptonshire the plant is best regarded as a neophyte, in other words a plant which, though originally alien, has arrived and taken on a wild state since 1500 CE. Though a neophyte in our county it is presumed native in Southern Britain where it occurs on well-drained calcareous soils usually near the sea.
Posted by Tony White at 06:55