It has been some months since I visited Boddington Reservoir but yesterday, finding myself in nearby Byfield with an hour or so to kill, I paid the area a visit. The reservoir itself was about two-thirds frozen over with a couple of dozen Canada Geese, Branta canadensis, cruising around the ice-free area. I decided to give the reservoir itself a miss and instead strolled along the west bank of the main feeder stream which comes in from the north. Unsurprisingly it too was frozen over and offered little of obvious interest.

On the banks grew teasels, Dipsacus fullonum, the prickly seed-heads by now stripped of seeds, probably by Goldfinches or a congeneric species.
A couple of metres away grew Lesser Burdock, Arctium minus. The two plants may appear superficially similar but differ in important ways. The seeds of the teasel, as suggested, are distributed largely by birds whereas the seed-heads of burdock cling to the coats of wild animals and, as most children soon learn, by us, and may be carried for several kilometres before becoming dislodged. In fact the two plants belong to separate families, the teasels in the Dipsacaceae (in old books, Dipsaceae) and the burdock in the Daisy Family, Asteraceae (old books, Compositae). Both are valuable to insects for the nectar yielded by their flowers.
I pressed on, passing a rather fine oak and, a little beyond, a wind turbine, its blades gently swishing. Except for the occasional car on the nearby road, all was silent. For me the structure is an impressive feature and whilst accepting that, in the wrong place, these turbines can be an eyesore, I feel that this site could have accommodated one or maybe two more.

A little further on, and for no apparent reason, the ice on the feeder stream disappeared. A kingfisher, Alcedo atthis, had been taking advantage of this open water but flashed away in a blur of startling blue as I approached. In severe weather these birds can face real hardship and, although a few years ago newspapers carried a photograph of a kingfisher diving through a hole in the ice, these frozen conditions often lead to high mortality rates. Hopefully this severe spell will come to an end before a complete freeze-up occurs. Tradition has it that halcyon days are the days when the kingfisher mates and I had assumed that the word halcyon was derived from the word Alcedo; etymology supports this idea but only in a rather oblique way.

Another hundred yards or so brought me to a simple bridge. I had been aware for some years that a nature reserve existed in the area but, had it not been for the sign attached to the bridge, I would have been unaware of its location. I am still not much clearer as this 'nature reserve' appears on no maps nor could I find any mention of it on the web pages of Natural England (which is the successor to English Nature).
﻿

An owl nesting box in an oak tree was the only obvious sign of conservation work. As for wildlife, most creatures were sensibly hidden away with only the empty shell of a Brown-lipped Snail, Cepaea nemoralis, remaining to hint at the area's possibilities.
Time to turn and retrace my steps but not before carefully examining a small (1cm diameter) fungus protruding from the trunk of a dead oak. I am quite prepared to believe that it is a common species but I have been through my books and trawled the internet, all to no avail. Anyone out there...? 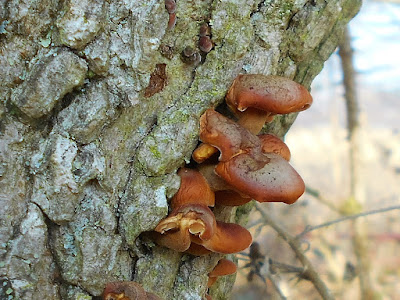