Our Coronilla valentina shrub is just coming into flower and, although particularly cold weather is forecast, it should bear its pretty, bright, lemon-yellow flowers over the next few weeks. Despite being a native of southern Portugal and Mediterranean regions it is reasonably hardy and is apparently naturalised in a few places, notably south Devon. But to be on the safe side I have positioned it facing south-east and close to the house. This is a dry part of the garden but, given its home on dry hillsides, this shouldn't be a problem. It belongs to the Fabaceae, a family which includes peas, lupins and laburnum.


It was introduced to Britain as long ago as 1596 and it has been deservedly popular ever since. Its rather gorse-like flowers are pleasantly scented, apparently reminding some people of ripe peaches and its neat, evergreen, slightly glaucous foliage is a bonus. Apparently its common names include 'Shrubby Scorpion-vetch' and 'Bastard Senna'. I'm not sure about the last name but Bloody Cranesbill, Geranium sanguineum, grows nearby and I am plagued by a clump of sodding Stinging Nettle, Urtica dioica, also not far away.
When I ventured out this morning to photograph the plant I saw a dead Woodpigeon, Columba palumbus, at the roadside. It's passing won't be lamented; I doubt any local farmers will be wearing black. 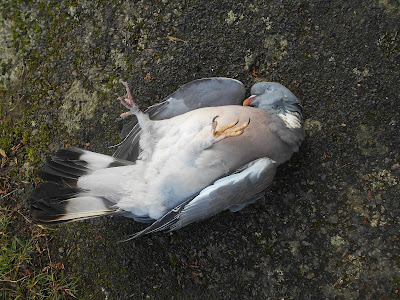 The specific name simply comes from the Latin palumbus - a dove. An old Scottish name for it is Cushie-doo, a rather affectionate-sounding name that belies its status as a pest with a current UK population of around eleven millions.  So common and reviled is it that specimens taken in mist-nets rarely seem to get ringed and certainly the specimen I examined today was ringless - unless you count the ring-like patch of white feathers on the neck which give it the alternative name of Ring Dove. I left it there, where a fox or crow may get to work on the corpse.
Posted by Tony White at 14:48