It has been some months since I last visited Kentle Wood; many weeks since I last scaled the absurdly complicated entrance stile. There is probably a government leaflet somewhere proffering advice about this: https://consult.defra.gov.uk/irritating.stiles./2g7au/is. But be careful: one tiny typo and you'll get guidance on sustainable scallop dredging, which is all very well if you live on the coast but... Incidentally I recently heard Julia Bradbury on BBC TV trot out the absurd yet-oft-repeated statement that  'nowhere in Britain are you more than 75 miles from the coast.' Try walking from Daventry to the sea, gal. I reckon that our nearest bit of coast is near Holbeach in Lincolnshire and is about 86 miles away. 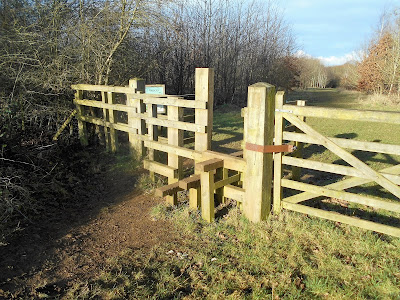 Now, having got that off my chest, where was I? Ah. Clambering over the stile.
Just before reaching the gate stands a small clump of Snowberry, Symphoricarpos albus. I wrote a little about this very familiar North American shrub recently ('Ashby Fields' 24 November) but omitted to mention a curious fact: although the plump white berries contain seeds with apparently well-developed embryos, these seeds rarely germinate and little success has been had with this method of propagation even by professionals. And yet on the continent the species is spreading steadily by seed. It may be that the seeds need to pass through the gut of a bird and in Germany Greenfinches, Carduelis chloris consume the berries avidly. Only rarely are seedlings found in Britain. 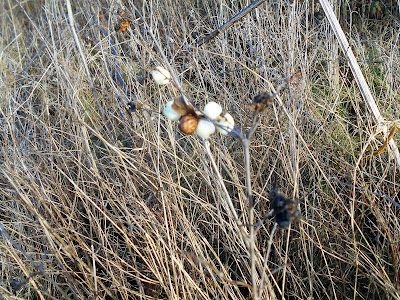 The weather was lovely and, although I had no expectations of finding anything out of the ordinary, there was a spring in my limp. As expected, the trees were largely bare but Beech, Fagus sylvatica, was still carrying its russet foliage - one of the factors making it such a good windbreak when used as a hedge. 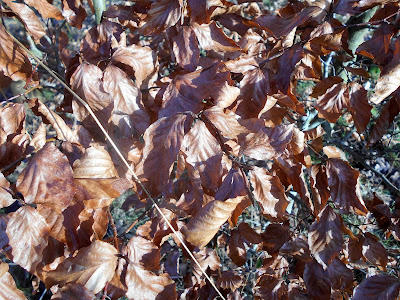 Quite unsurprisingly the coppiced hazels carried great numbers of catkins and the brownish, rather withered condition of some suggested that they had been out for the best part of a month. 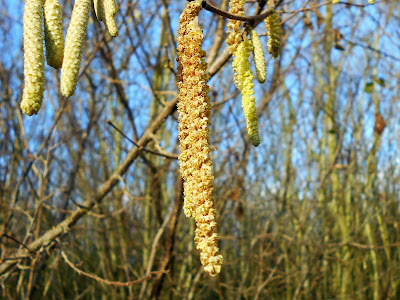 A clamorous noise made me look up to the sky where a Buzzard, Buteo subbuteo, was being harried by four crows. The buzzard neither swerved nor deviated in any way, serenely following its chosen path. Once it is beyond their territory I am guessing that the crows will lose interest.
Logs carefully lifted to one side revealed two species of Carabid beetle, known to coleopterists as Ground Beetles. As children in Northampton my friends and I always referred to them as 'rain beetles' and I note that in Lancashire, according to Peter Marren's excellent 'Bugs Britannica', they were known as 'rain clocks', apparently because if one was trodden on there would surely be rain the next day. One of those found today was the very common Leistus spinibarbis with a lovely blue iridescent sheen, whilst the other was the slightly larger and probably even commoner Nebria brevicollis.
A number of apples trees have been planted and they still carried large quantities if fruit. In my experience they are only readily consumed after they have fallen to the ground. I should be able to establish the taxon to which these apples belong when their foliage has fully developed. 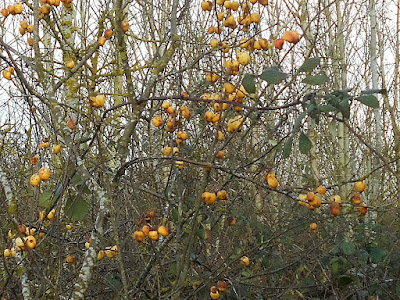 A new industrial complex has been established to the east of Kentle Wood and it is separated from the woodland by a steep bank. Literally hundreds of trees have been planted on the slope with the object, presumably, of stabilising the bank and screening the large buildings still being erected, but they will surely encourage more wildlife. 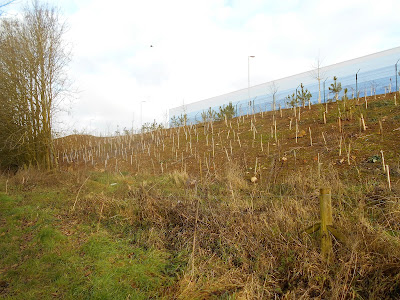 Ok, nothing to get the heart racing, but pleasant enough and it is, after all, a very new woodland. It was pleasing to note that more lichens are becoming established. On the trunk of just one cherry tree I noted five species of lichen and doubtless many more escaped my not-very eagle eye.