Last year, between the 1st and 4th of January, members of the Botanical Society of the British Isles recorded 635 taxa of flowers in bloom. The word 'taxa' is a convenient word to use as a taxon can refer to any biological group, whereas a species can be rather more difficult to pin down. For example I noted a Hebe (Veronica) in flower earlier today. I could have tried to ascribe a species name to it but most of these popular garden shrubs are hybrids. But a taxon it certainly was - and that must suffice. I am not sure what the criteria were for the survey but garden plants must certainly have been included and it is worth bearing in mind that the survey area included the Isles of Scilly and, presumably, the Channel Islands.

Only a dozen or so plants, but it must be agreed that the East Midlands is hardly the most balmy area in Britain.


My morning walk through The Grange area of Daventry added nothing to the list nor, to be honest, did I expect it to. But my pulse quickened [Ed. don't be so dramatic, your pulse did nothing of the kind!] as I saw an Elder bush some 50-60 metres away bearing orange patches of what was surely an odd lichen.

My hopes were shattered [Ed. There you go again. What's got into you today?] when I realised that they were patches of spray-paint, marking branches that were encroaching the footpath and due to be removed.
It must be admitted that Elder (Sambucus nigra) can be a bit of a nuisance but perhaps we do it an injustice. Birds relish the berries as do bank voles and dormice, while moths feeding on the leaves include White Spotted Pug, Swallowtail, Dot Moth and Buff Ermine. The Elder Aphid forms colonies on the twigs and these in turn help to sustain ladybirds. And then there are the uses to which humans put the tree. Elderflower cordials and presses have become very popular in recent year and Elderberry wine has always been popular with amateur wine makers. (For more information on this topic I recommend an article, 'Superior Merits of a Troublesome Weed' by Prendergast and Dennis, contained in British Wildlife, Volume 8, No 5.)

As is often the case I seem to have wandered off the topic suggested by this blog's title, but I got carried away rather. Anyway, after my disappointment with the Elder tree I walked on for a mile or so under a lovely blue sky, against which a Birch tree stood out beautifully, and returned home for a nice 'cuppa'. 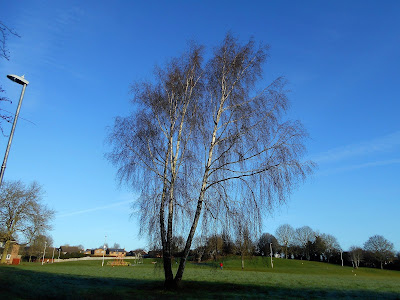