My alpine tub and sink need dressing with horticultural grit so, having dropped Chris off in Daventry town centre, I decided to take Shanks's pony to Dennett's Garden Centre.
Twit!
Having dropped off a couple of books at the library I set off, best foot forward (probably my left foot, as my right ankle is a bit dodgy). This, I thought, will be a piece of cake - un morceau de gateau - as the French probably never say. At the corner of  Market Square a Lavatera was still in bloom. 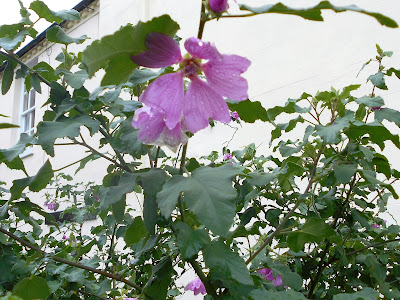 It was Lavatera thuringiaca (formerly known as L. olbia). It is a plant for the larger border and, although its common name of Tree Mallow overstates the case, it attains considerable dimensions. In my last blog, 'Hebe and Veronica', I discussed name changes. Now for more: three genera of the Mallow family, Malvaceae, are to be found wild in Britain: Malva itself, Lavatera and Althaea, the Marsh Mallow. Superficialy they are very similar and DNA studies indicate that the distinction between Malva and Lavatera is not justified and all plants within these genera should henceforth be regarded as members of the Malva genus. As for Althaea, these, it is suggested, should be placed in the Hollyhock genus, Alcea.  Furthermore the Mallow family should apparently not be regarded as distinct from the Lime Tree family, Tiliaceae. Oh Gawd!


Anyway, I did not allow these thoughts to intrude upon my sense of enjoyment as I strode forth through the churchyard of Holy Cross church. I made my way from the rear of the church to the busy A425, intending to walk south, but found that no pavement existed and I was forced to take a wide detour. I headed east and crossed a broad meadow - or at least it would have been a meadow a few decades ago - towards the area known as Southgate. I was in completely new territory and I realised how little I knew of Daventry.


In the hedgerows ot the east side of the meadow I found Wild Privet, Ligustrum vulgare, growing. With its lanceolate leaves it is easily distinguished from the ovate-leaved Garden Privet, L. ovalifolium. This latter is a Japanese shrub which is rarely self-sown.

Our own, native, Wild Privet is common on limestone but here was a little unexpected. If the black berries look rather like small olives that is only to be expected for it is a member of the Olive family, Oleaceae.

By now it had become clear that my little stroll was turning into quite a walk, but not without interest. Despite climate warming - and on this matter I part company with that nice Mr Trump - this November has been distinctly chilly but, draped from a fence, a Passion Flower, Passiflora caerulea, was bravely flowering. Absurd.
Anyway, via High March I pressed on towards Dennett's Garden Centre. Approaching by a partially flooded track (we have had heavy rain over the last thirty-six hours) I had another surprise. Growing beside the track  was a thicket of one of our most intriguing plants, the Great Horsetail, Equisetum telmateia.
﻿

I'll refrain from going into the fossil history of these primitive, ancient plants but, primitive or not, they are still with us after - according to modern research - over 130 million years. I should not have been surprised by its presence as this species is still a widespread plant in Northamptonshire.
So, after a long slog I arrived at Dennett's. Yes, they had the grit but it was the wrong colour! I left empty handed. But it had been an interesting and revealing walk.