Some months ago - 16 January to be precise - I published a blog in which I spoke warmly of Drayton and expressed a determination to pay this area of Daventry a further visit. Spring passed, as did summer and autumn. Finally today, beneath a cloudless sky and with the temperature at the six degrees mark, I got around to it.


Too late!
An Indian Bean Tree, Catalpa bignonioides, which a few months ago would have borne its panicles of lovely white, purple spotted flowers, now stood leafless and forlorn, with only its cylindrical, pod-like capsules there to remind us of its summer beauty. Incidentally I have yet to find one of these fruits containing ripe seed. The common name refers not to India but to the North American 'Indians', the tree being a native of south-eastern U.S.A. and the 'Latin' name is derived from the word Catawba, the name used by the indigenous people.

A few metres away grew another holly look-alike, (see 'Spines and Cyanide', 22 October); this time it was a New Zealand Daisy Bush, Olearia macrodonta. It is sometimes referred to as the New Zealand Holly. In my youth this species was regarded as borderline hardy; now it can be planted safely over most of Britain.

A few months ago this would have borne dozens, if not hundreds, of daisy-like flowers. Now only their withered, sun-dried remains hinted at their summer glory. 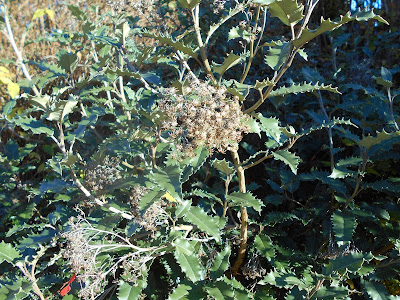 In fact flowers were almost totally absent. An exception was a magnificent Strawberry Tree, Arbutus unedo, standing in a garden. Not only was it covered in hundreds of its ivory-coloured bell-shaped flowers but dozens of its scarlet fruits were also present. I was tempted to knock the door and ask the owner if I could enter the garden for a photograph but instead resolved to get one for myself.

'Is that a Wild Privet?' I asked myself, glimpsing some glossy black berries. I crossed the road for a closer look and saw that the plant had a twining habit. It was Japanese Honeysuckle, Lonicera japonica and, attractive as they were, I had missed out again, being too late to enjoy its creamy, highly fragrant flowers.

This is a fast-growing, evergreen climber but can be over-vigorous for many gardens, so plant it with care!
Sunny though it was the temperature remained low and I lengthened my stride, keen to get home, pausing only to photograph a fine Hornbeam, Carpinus betulus. It was the popular 'Fastigiata' form but the shape had been distorted by unsympathetic pruning of the lower branches.