Chris has recovered from her illness sufficiently to resume work as a volunteer in the Air Ambulance shop so, on a cold and frosty morning, I took her into Daventry town centre, left the car with her and, walking briskly, took a zigzag path home.


Before I had even left the centre of the town I had a wee surprise. On a leaf of a London Plane tree, Platanus x hispanica, I found an unfamiliar but distinctive mine. It had been formed by one of the so-called micro-moths, the London Midget, Phyllonorycter platani.

It was first found in Britain in 1989 and was first recorded in Northamptonshire in 2003 by my old friend George Higgs, but it is still largely confined to the south-east of the country. Plane trees are not native to the U.K. (they are found wild southern Europe) so this moth is likely only to be found in urban situations.
By this time it was beyond noon but frost was still lingering in sheltered places.

The day was almost without wind but the occasional tug of breeze brought down a shower of leaves. In general though trees had already lost most of their foliage and the bare twigs formed a tracery against the brilliant blue sky. 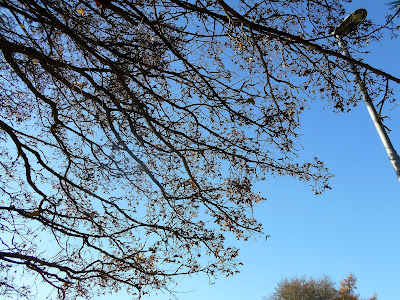 Over September and October the flowers of Ivy have been an extremely important source of nectar. Quite remarkably a few flowers linger but I saw none receive an insect visitor.
Ivy now has a second stage of importance as the berries ripen. All those I saw today were still green but these will begin to ripen in time to replace diminishing alternative food sources for birds such as thrushes.

In two days time the first day of winter arrives - at least meteorologically - and the cold may tighten its grip, but on the grass verge beside our house yarrow, Achillea millefolium, is still flowering.

I have just been reading an account of an early neolithic burial; apparently the archaeologists 'knew it had been a summer burial because yarrow flowers had been strewn around the body'. Hmm...