Back with the mosses

Invariably, at this time of the year, my attention turns to those fascinating organisms, mosses. There must be a name for this interest. Bryomania? Hardly in my case; I have never felt the urge to dash off to a remote Hebridean island in search of some bryological gem. Of course, I rarely find anything other than very mundane species but this is no surprise, given that the habitats I investigate are almost equally mundane. But it doesn't stop me from searching, and  I'm always prepared to be surprised. In fact Northamptonshire really does have a poor moss flora. As our county moss recorder, Rachel Carter, recently wrote regarding the results of a meeting: ' The dearth of interesting bryophytes in Northamptonshire reflects the genuine poverty of the [moss] flora'. The county has obviously no coastline, very few exposed rocks, ditto marshes and no acid bogs. 'Bland' is the word that springs to mind.


Walls are always worth checking out and it is only when a wall has been recently repaired with new stone that we realise what a softening effect mosses have; the new section may look neat but the appearance will, to me, always be raw und slightly jarring.


Of course it is wall mosses that are the first to come to the notice of most people. They generally form little green cushions and mosses of this type are known as acrocarpous. The other form of moss, often the bane of gardeners, has a pleurocarpous habit and is typified by the straggling mosses such as Springy Turf-moss, Rhytidiadelphus squarrosus, which colonise lawns, particularly where the soil is poorly drained.  From above the leaves appear to have a star-shaped pattern.
No matter which group a moss belongs to, a careful examination with a lens shown them to be organisms of great delicacy and beauty.  Truth be told, for me the study of mosses represents a steep learning curve, starting with almost zero knowledge. And I constantly get side-tracked, as when I bent down yesterday at the foot of Windmill Hill to look at a lichen-encrusted tree trunk and almost brushed my nose against these wasps. 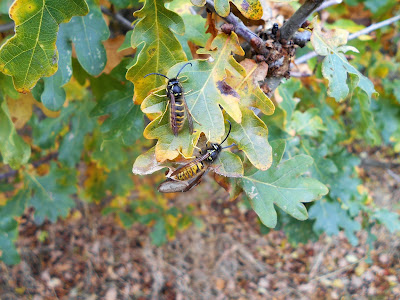 About a dozen of them had congregated on some oak leaves. What was special about these leaves was unclear. The insects were in a torpid state and were probably moribund. Chances are they'd be dead by nightfall.

A little further on and I came upon a dead branch bearing a troop of tiny fungi. They were cup-shaped with each fruiting body no more than 5mm across. Undoubtedly they were some sort of Resupinatus. Almost certainly the species was R. applicatus, known as the Smoked Oysterling, but as with mosses, they're a bit outside my field.
With progress as slow as this I looked around and realised that dusk was setting in and a dew was forming on my clothes. Stupid boy!