The Exotic and the Mundane

A walk earlier today took me from the Timken area of north-west Daventry into the town centre and I was struck by the exotic plantings in otherwise 'ordinary' gardens. First off was a Chusan Palm, Trachycarpus fortunei, otherwise known as the Chinese Windmill Palm.

It was found by Robert Fortune growing on the island of Chusan, south of Shanghai, so it is technically sub-tropical. However it is hardy in most parts of the British Isles and will make quite a large tree. That being so, it is probably best not to plant it too near to the house! 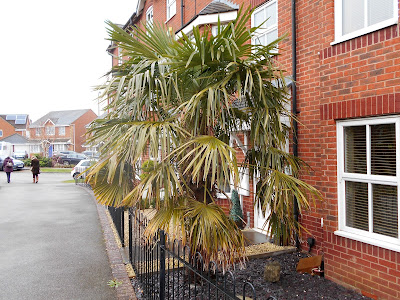 Only about a hundred metres away grew a tall Cabbage Palm. Although the Chusan Palm is a true palm, thus belonging to the Arecaceae, the Cabbage Palm, Cordyline australis, is a member of the large Asparagaceae family and is thus related to asparagus! It should be said that Cordyline species have received various treatments by taxonomists and the situation is confused.

Thoughts of sub-tropical islands were banished as I entered Daventry's centre. Daventry has many laudable features, but imaginative, well-tended floral features are not among them. All that caught my eye were two plants in the cabbage family, Brassicaceae. Throughout my childhood and youth this family was known as the Cruciferae, a reference to the cruciform arrangement if the flowers, clearly shown in the photograph below.
﻿

Growing beside this yellow-flowered specimen was a very similar plant bearing white flowers, but a closer look showed that they belonged to the same species. The Wild Radish, Raphanus raphanistrum, is variable in terms of flower colour but this very bristly species is otherwise distinctive. Despite the name it is not the same species as the Garden Radish, Raphanus sativus.

Wild Radish is a widespread weed of arable land and waste ground but in Northamptonshire it has a patchy distribution, with the yellow flowered form being the more common.

One other sub-tropical plant was of interest to me: a beverage based on Coffea arabica was to be found at Costa's, so a cup of 'flat white', sui generis, warmed me and sustained me for my walk home.