A touch of frost

Chris got home last night and informed me that parked cars were wearing a coating of frost. This was alarming; no frost had been forecast and my Abyssinian Banana, Ensete ventricosum 'Maurelii', was unprotected. I dashed out and swathed it in horticultural fleece; I may have got away with it as tender bedding plants such as Tagetes seem unscathed. (See footnote regarding the frost)


Frost or not, some plants are still in flower. One surprise is a Sea Holly, Eryngium bourgatii. Despite their common name most plants in this genus are not seashore plants at all. That distinction belongs to Eryngium maritimum, a British native. E. bourgatii is more likely to be found on dryish hillsides in the Mediterranean region.

With its steel-blue bracts and attractively variegated leaves it is a delightful plant for a well-drained spot. But it surely shouldn't be coming into flower in November!
In Daventry, despite the extra warmth of an urban situation, there is little colour to be seen.  A clump of Euonymus japonicus grows near to the library. It is similar to, and often confused with, Euomymus fortunei. Here and there it has become naturalised in the U.K.
Interestingly it bore no fruit except on branches where reversion had taken place. Perhaps the extra chlorophyll provided the energy needed for fruit production as variegated foliage tends to be constitutionally weak.

A closer look at the fruits makes clear its relationship with our native Spindle Tree, Euonymus europaeus. For this family 'the distinctive fruit is diagnostic' * and unmistakeable. 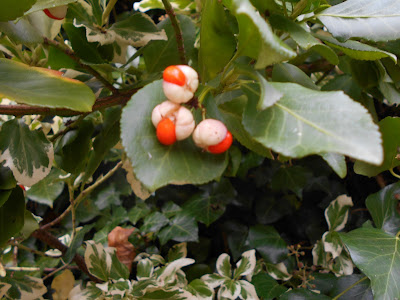 Also in fruit was the Stinking Iris, aka Stinking Gladdon, Roast Beef Plant, etc. Its Latin name of Iris foetidissima tells you all you need to know; it is indeed very stinking when the leaves are rubbed. It is very widespread hereabouts yet I was completely unfamiliar with it during my childhood So what has happened over the intervening decades?

It is a native plant but most examples to be seen are surely garden escapes, aided by bird sowing. It makes up with its scarlet berries for what the relatively drab flowers lack in colour.

The only striking flowers I noted were those of Hypericum 'Hidcote' in a municipal bed. It is a hybrid of uncertain parentage. There is a wide belief that the non-native Rose of Sharon Hypericum calycinum is one parent but there is no certainty to it. In Britain the Rose of Sharon rarely produces seed, spreading vegetatively, so the cross was presumably made abroad.

Hypericums give their name to the Hypericaceae family. It consists of only six genera but Hypericum is overwhelmingly the largest, and is the only genus found in Britain.

Footnote  For the last 3-4 months our loft has provided a congenial home for a nest of wasps. The sharp frost, following a spell of very chilly weather, seems to have delivered it the coup-de-grace  and the area beneath the entrance is now littered with their corpses.