We probably get more than our fair share of invertebrate visitors, having deliberately introduced many plants attractive to bees and butterflies. Even so, there is a long way to go before our little plot can match the extraordinary wealth of species that have been found in the Leicester garden of Jennifer Owen. 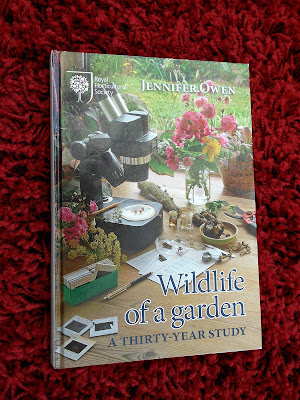 Her remarkable book tells of the 2673 species she recorded, including 474 plants, and 1997 insects, four of which were new to science!
No. We have so far only found rather predictable organisms, but none the less interesting for that. Like the Small Tortoiseshell butterflies, Aglais urticae, here nectaring at Pratia pedunculata. This plant is a tiny member of the Bellflower Family, Campanulaceae, and is named after M. Prat-Bernon, a French naval officer.

Tiny it may be, but this little Australian creeping plant features in the Royal Horticultural Society's list of 'plant thugs' - but I didn't know that when I popped it into the rock garden  - and now I spend lots of time pulling out unwanted bits. On the plus side, one very successful introduction has been  the Iranian Wood Sage, Teucrium hircanicum.

I have mentioned this plant in an earlier blog but it is a handsome member of the Mint Family with long purple racemes of flowers. It is native to the region once known as Hircania, now shared between Iran and Turkmenistan. Bees of various species are constantly visiting it.
Nearby, and more of a surprise was this Forest Bug, Pentatoma rufipes, clinging to a cordyline leaf.
Its favourite habitat seems to be woodland edge or maybe a woodland clearing but it is a strong flier and there are plenty of wooded areas within a couple of hundred metres of our garden. The word 'rufipes' refers of course to the red legs and the orange femurs (or femora) are easy to see in the photograph, helping to identify it.
I suppose the word 'visitors' embraces certain weeds, particularly those whose seeds have drifted in on the wind. One such plant is Bristly Ox-tongue, Picris echioides.

It is covered - leaves, stems, flower buds - with coarse prickles arising from white bases, making it unpleasant to handle.  I'll leave it for a few days to see if insects take an interest in it, but then it will have to go.
Speaking of prickly plants, our Sea Hollies are doing well this year with Eryngium bourgatii, a member of the Carrot Family, Apiaceae, resembling a thistle rather than a carrot, even though the Sea Hollies are in the Carrot Family, Apiaceae. The spines may deter all but the hungriest of grazing animals but are no deterrent to insects such as this Marmalade Fly, Episyrphus balteatus.
Rather few flies have been given truly vernacular names (although many have been given 'artificial' names in recent years) but this extremely common hoverfly is an exception, perhaps because of its distinctive appearance. Each segment of the abdomen's back (each tergite, that is) bears two black bands, one broad and the other much thinner, and is the only British hoverfly to have this patterning. These markings give the insect its specific name, balteatus being from the Latin word for a belt. It overwinters as an adult, but can it overwinter in the U.K? Certainly it migrates to this country, sometimes in vast numbers, but evidence of overwintering seems scant. However, with climate warming, who knows?
Some plants - I have already mentioned the Bristly Ox-tongue - introduce themselves and sometimes cause puzzlement. A month or so ago I was weeding out a few undesirables from our front garden when I found something I couldn't identify. It looked vaguely familiar and yet...

I decided to leave it alone and let it flower. Yesterday (29 July) the first flowers appeared and it turned out to be a St John's Wort. To be more precise it is Perforate St John's Wort, Hypericum perforatum, and is probably the commonest Hypericum in England; it probably came in on muddy shoes. This species, and other closely related ones, yields a powerful anti-depressant. The name refers to its traditional gathering to celebrate the eve of St John the Baptist on 23 June.

Although it has only just flowered in our garden the species has been in bloom for about a month around Daventry, where it occupies waste or scrubby ground. It is very common and has been known in Northamptonshire since 8 May, 1662, where it was apparently found by the famous botanist, John Ray, growing on the walls of Northampton Castle.
Now, having identified it, I'll remove it. Gardening can be brutal!