The number of invertebrates present but not yet recorded in Kentle Wood must run into hundreds or even thousands so in order to track down a few more I used a different technique on today's visit. I have used an umbrella when beating bushes on previous occasions, but not for a long time.

For rather obvious reasons white is the most effective colour and its usage soon brought results, a Forest Bug, Pentatoma rufipes, dropping into the umbrella with a gentle thud. Not a new species for Kentle Wood, but it was a promising start.
A few yards further on and a Southern Oak Bush Cricket, Meconema meridionale, was taken. This is a new record for the wood and in fact was first recorded in Britain as recently as 2001. Since then it has spread rapidly and had reached Nottinghamshire by 2012. By the end of the afternoon I had noted several specimens. I also took a specimen of the Speckled Bush Cricket, Leptophyes punctatissima.
﻿

Traditionally springtime is the mating season - but tell that to insects!  The Common Froghopper, Philaenus spumarius, is very well known, if only for the mass of froth it forms on a range of plants. Children are always delighted when told that the froth is formed by the insect blowing bubbles from its bum!
﻿

It is an extremely variable insect and the photograph shows two contrasting forms mating. It is obviously pointless attempting to identify this species by its colour for even bright purple forms are known; shape, size and various structural features must be studied.
Almost every thistle head had attracted specimens of the very common beetle, Rhagonycha fulva, and most seemed to have found a mate. They are best known for using Hogweed umbels as a meeting place but it is clear from this photograph that Creeping Thistle is a very acceptable substitute.
Harvestmen rarely get a mention in my blogs but these relatives of spiders are of great interest - or at least I think so - and deserve space. Many seem to reach maturity towards the end of summer, eg, harvest time, and I took three species. Among the commonest were specimens of the long-legged Dicranopalpus ramosus.
The word 'ramosus' means 'branching' and in this case refers to the palps. The palps look like an extra pair of legs at the front of the animal and, as the photograph shows, these appear to be forked due to the development of an apophysis - a branch usually small or non-existent but very obvious in this species.
﻿

My knowledge of moths is sketchy in places and when it comes to footman moths my limitations become obvious. I am fairly certain that this is a Dingy Footman, Eilema griseola, but I won't submit the record.
Finally, a grotesque creature that dropped into my umbrella just before I set out for home. I must confess that I was a little taken aback when it landed with a gentle plop. What on earth? It was clearly something capable of a nasty bite! 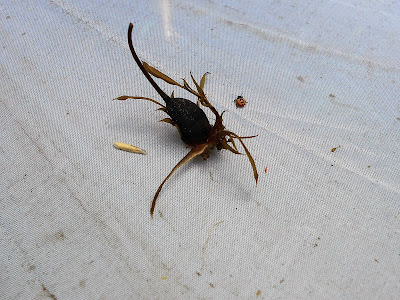 It was, of course, the withered remains of a rose hip and I gently returned it to the ground beneath the briars. I was clearly hallucinating. Time to go home for a cuppa...
﻿