I grow very few roses so when I find signs of damage I like to establish the cause. One rose I'm particularly fond of is Ferdinand Pichard, so when I found neat, semi-circular holes at the leaf edges I was a little vexed.
Not that I was surprised because the culprit is very widespread: it was a leafcutter bee and almost certainly the work of Megachile centuncularis. This is probably the commonest species in gardens and was certainly present in our previous garden in Byfield.
The females cut out pieces of leaf and bear them back to their nest. This leaf portion is then used in the construction of neat cells which are filled with a mixture of nectar and pollen - plus an egg.
﻿﻿

I have found similar semi-circular shapes cut into the leaves of our Solanum crispum, and I again suspect the work of leafcutter bees. 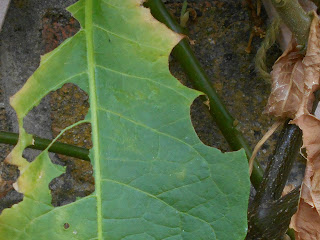 A few days ago, at Daventry Country Park, I was photographing a specimen on thistle heads. It was collecting both nectar and pollen, and the latter is gathered in a rather unusual way. Most bumblebees collect pollen in a sac on the hindlegs but Megachile species eschew this method. Instead the underside of the abdomen is covered in specialised hairs, to which the pollen clings.
Eventually the whole of the ventral side will be covered in pollen, although it must be said that the hairs along the margins of the abdomen can be naturally cream or white. I made no attempt to catch or identify the Megachile in question and there are seven species known from the British Isles.
The genus is a huge one, with over 1,500 species across the world, and includes the world's largest bee, Megachile pluto. Incidentally, this species, with a wingspan of over sixty millimetres (2.5 inches) was believed to be extinct until being rediscovered in 1981. And yes, it has a very painful sting!