Today involved another trip with Chris to Northampton General Hospital and as usual, while she underwent lengthy treatment, I strolled around the hospital grounds.
I have to say that nothing sensational was observed. Buddleia, Buddleja davidii, was flowering profusely around car parks and on neglected banks but not a butterfly was to be seen. On the plus side, bumblebees were plentiful with Buff-tailed Bumblebees, Bombus terrestris, nectaring as though a price rise were imminent. The bees were also busy at a few plants of Black Horehound, Ballota nigra, clearly not put off by the unpleasant smell.


Virtually all members of the Mint family, to which Black Horehound belongs, have a smell of some kind and this one has a particularly unpleasant one.
Deadly Nightshade, Atropa belladonna, usually gets a mention when I write about this site. The largest plant had been hacked down but I'm betting that those responsible were unaware of the species they were dealing with or they would surely have removed it completely. As it was, some overlooked branches had continued to produce flowers and fruit. 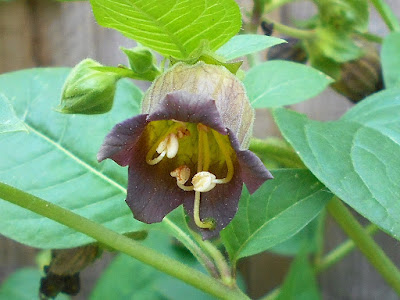 The latter are still green but will soon ripen to a luscious purple. A & E stand by! 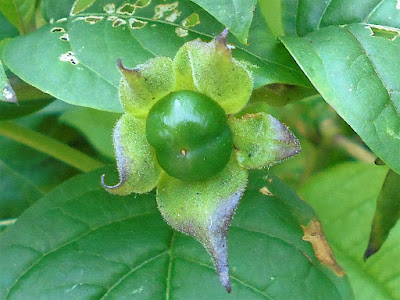 The leaves had been extensively mined by the grubs of a tiny moth, the Bittersweet Smudge, Acrolepia autumnitella. It is curious how some plants, potentially lethal to us, can be life-sustaining for others.

All these observations were quite predictable, but I was in for a surprise - literally a small one.
On areas of waste ground grew several dozen plants of Small Toadflax, Chaenorrhinum minus. This tiny annual, a relative of garden snapdragons, was easily overlooked, each flower measuring only two or three millimetres across.
﻿
I was pleased to find it because, although maps such as the one in the latest Northamptonshire flora* show lots of records, it seems to have been lost from many of these locations and it is now quite scarce.

* Gent and Wilson (2012) The Flora of Northamptonshire and the Soke of Peterborough.