My previous blog told of a visit I made to the edge of Daventry Country Park. I mentioned 'a fine display of wild flowers' but gave few details. Today I revisited the area, again in search of invertebrates but paying a little more attention to the flora.
Perhaps most obvious were clumps of Common Ragwort, Jacobaea vulgaris. If the Latin name seems unfamiliar it is not surprising because since my childhood it has been Senecio vulgaris and is just one of a host of 'Senecios' to undergo a recent name-change. 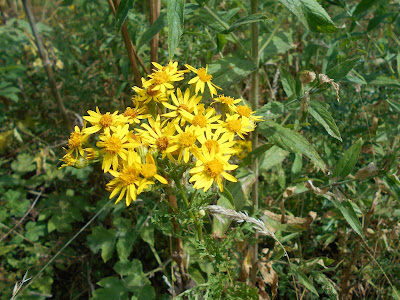 It is generally hated by farmers on the grounds that it is toxic to horses although in my opinion this attitude is unjustified. Horses generally leave the plant well alone and cases of horse fatalities seem quite rare. Nevertheless it is subject to vigorous provisions under the Ragwort Control Act, 2003. It is a popular species with entomologists, providing nectar to  large numbers of interest as well as being well-known as the food-plant of the Cinnabar moth.
Creeping Thistle, Cirsium arvense, was prolific, with some flower heads (capitula) being pure white. This very pale example is here being visited by a Gatekeeper, Pyronia tithonus, so-named perhaps because it works its way along hedgerows, apparently going from gate to gate. Oddly, the thistle is another species subject to control by law.

The first two plants are clearly serious weeds, but what of Yarrow, Achillea millefolium? It can occasionally present a problem but generally it is easily controlled and many insect species rely on it to a considerable degree. Its red and pink varieties are popular garden plants. Here at the edge of Daventry Country Park it was prolific, but not in any way a problem - and much appreciated by skipper butterflies. 'Yarrow leaves', according to Adele Nozedar in The Hedgerow Handbook,' (2012) are good in mixed salads; a little lemon juice and sugar really helps to bring out the flavour'. Perhaps I should be a little more adventurous!

Some willow herbs can be weeds but the Great Willow Herb, Epilobium hirsutum, is rarely a problem. It tends to occur in damp ground, including river and lake margins; here it was in ground currently very dry and the flowers were almost over. It was only getting an occasional visit from insects, an exception being the bug, Dicyphus epilobii, which was very common on the foliage.

This is the food plant for the caterpillar of the Elephant Hawkmoth, Deilephila elpenor, and I kept my eyes open for its presence - with no luck. Perforate St John's Wort, Hypericum perforatum, was present, as was Ox-eye Daisy, but one of the most eye-catching was Tufted Vetch, Vicia cracca. Sprawling and untidy? Yes. Common? Yes. But a lovely and undervalued plant. And the bees appreciate it too.
Finally I must mention the Meadow Crane's-bill, Geranium pratense. It was reported from the 'New Reservoir, Daventry' in 1843 by William Notcutt - and was still there today! It was inaccessible behind a dense barrier of brambles, and I only managed an unsatisfactory photograph.
﻿

It is a beautiful plant in its own right, but its hybrid with Geranium himalayense is the very popular 'Johnson's Blue'.
With all these flowers present it was not surprising that I recorded a wide range of insects and the area may well receive a third visit in, perhaps, early autumn.