When will my May come?

This chilly, dismal April drags on. I am reminded of Barnfield's poem*:


When will my May come, that I may embrace thee?
When will the hour be of my soules joying?
Richard Barnfield (1574-1627)


Yes, I know. He was speaking of unrequited love - he wasn't getting his oats. Well, I'm not getting my fair measure of sunshine and it is (almost) equally frustrating.
So, on one of my all-too-frequent visits to Daventry, I found myself facing biting winds and cold drizzle - again. To be fair, Chris and I had spent a pleasant hour or so on our allotment during the morning, in dry conditions and a few glimpses of sunshine. Our resident, very tame cock blackbird was there to keep us company and help to control the earthworm population.
﻿
﻿﻿

No doubt he was feeding his missus while she sat on the nest.
Anyway, that was the morning, this is the afternoon. Daventry jobs wouldn't go away so I gritted my teeth, pushed on and cleared up a few matters. My errands took me zig-zagging around the town and, as a natural nosey parker, I sought items of interest...and largely failed.
I am not a great fan of Bergenias for too often the foliage is allowed to remain until it deteriorates into a mess of tatty, slug-nibbled 'elephants' ears'. However, when given proper care, as on this tiny municipal flower bed, I must allow that it can be attractive.

As a member of the saxifrage family, Saxifragaceae, it is related to London Pride, Saxifraga x urbium, and indeed looks rather like London Pride on steroids. 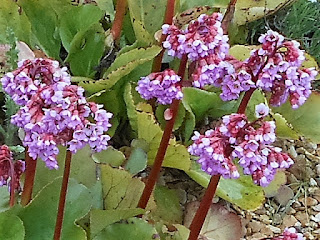 A month or so ago I put a plant of Chinese Bramble, Rubus tricolor, against the fence in our back garden. This was a risky move as the species can become rampant and explains why I limited myself to the one plant, despite the fact that the raspberry-like fruit (it is sometimes called the Korean Raspberry) is edible and quite tasty. Why do I mention this? Well, it has been used in Daventry as ground cover and today I lingered near the Health Centre for a minute or two to take a closer look.
﻿

The foliage is rather attractive, particularly if the plant is used to tumble down a bank but it was the tips of the branches which caught my attention. Salmon-pink and covered with soft bristles they are very attractive but easily overlooked. They are, I feel, one of the plants most pleasing features.
I was looking forward to getting home for a hot drink but a number of little curious structures on a brick wall made me pause. They were the pupal casings of ladybirds and 40-50 were present. Rather like the chrysalis of a butterfly, they are left behind when the adult - the imago - emerges.
﻿

This casing is unique for each species and the previous owner of this compact, desirable residence was a Harlequin ladybird, Harmonia axyridis. This is hardly surprising given that this is probably the commonest species hereabouts.
Nearby was a plant I rarely encounter. It was a Kapuka, Griselinia littoralis. This New Zealand shrub is, as the specific name suggests,  a seashore plant and makes a good choice here in Britain for an exposed coastal garden. It is, however, a rather undistinguished shrub and not one to catch the eye. Even so, I was pleased to encounter it. Formerly placed in the Dogwood Family, Cornaceae, recent genetic work suggests that the seven species forming the genus are best placed in their own family, the Griseliniaceae.
﻿

Only a few hundred metres to go now and the rain was getting heavier. There was just time to admire the exotic flowers of  another New Zealander, Sophora microphylla 'Sun King'. Known as the Kowhai, it is not bone hardy and appreciates a sheltered spot. But although Daventry is not in Britain's balmiest region it was clearly thriving, raising a rude finger to the rain.

It is a member of the Fabaceae Family and is thus related - though not closely - to laburnum, and shares with that plant some distinctly poisonous properties. But I had food awaiting me at home anyway so I wasn't tempted.


* I am not that much of a  poetry buff and only know the work through Benjamin Britten's setting of it in his 'Spring Symphony'.