Flore is a very interesting  village immediately to the east of Weedon. It has something in common with Kilsby in that people in their cars tend to hurry through on the main road and are unaware  of the fascinating range of houses, old and new, lining the narrow little streets of the village. The name is interesting: it was Flora in the Domesday Book, suggesting a connection with flowers, but remains of a tessellated Roman pavement or floor have been unearthed nearby. If this was known in Anglo-Saxon times the true origins of the name may be a reference to this feature.
Charles Whynne-Hammond, in his book 'Northamptonshire Place Names', written in 1994, remarks: 'The area has long been famous for...the botanical wealth of the local gardens'.Yesterday Chris and I, together with friends, went for a look around the gardens, and this 'botanical wealth' was still evident from the very first one we visited.


To my mind Fritillaria persica is a superb plant but my attempts to grow it have ended in failure. Seeing it flourishing in a lovely garden in Spring Lane has fired me with enthusiasm and I'll give it another go, perhaps growing them from bulbs in a pot, where conditions can be controlled.

Kerria japonica is a member of the Rose family and is a fine plant too. Unfortunately the form grown is almost invariably, 'Pleniflora', and this was common throughout the village. To my mind it is a most unattractive plant and, being double, has a fundamental flaw in that it is of no interest to pollinating insects. However, I was fortunate, for in one of the gardens visited the original single flowered type was present.
With simple, buttercup-like flowers (botanists have often remarked on the similarities between the Buttercup family and the Rose family) it is, I consider, a far more garden-worthy plant.

In another garden the rather sinister stems of a Voodoo Lily caught the eye. It was unlabelled and I couldn't find the owner but the species was almost certainly Typhonium venosum. T. guttatum is similar but on the balance of probabilities I'll go for the former.
These strange members of the Arum family, formerly referred to as Sauromatum species, are native to upland regions in Africa and Asia but will survive in a conservatory or even, as in this case, in a sheltered area outside. It grows from a corm and remarkably will flower if simply placed in a saucer of water but, easy though it is, I may give it a miss. The busts of five empresses near by in this remarkable garden will be holding their noses when the flowers are produced because they (the flowers) are spectacular but unfortunately smell of rotting flesh or a dirty, wet dog. 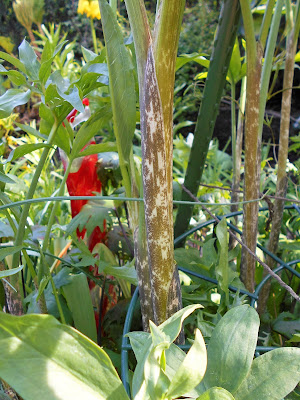 More acceptable if a little more mundane, was a Chocolate Vine, Akebia quinata. Its flowers are rather small but are an unusual maroon or brown colour and smell of chocolate.

This vigorous climber, a native of Japan and Korea, is reasonably hardy and makes a talking point for visitors to the garden. In very warm summers it produces sausage-shaped fruits but I have not seen them produced in Britain. I understand that they are edible but not very palatable.
Near to the Voodoo Lilies a pan of Pleiones was flowering. They were unlabelled but were almost certainly Pleione formosana, a native of China, and its common name of Windowsill Orchid gives a clue as to how it could be grown. It will however be scorched by hot sun and benefits from being misted occasionally. Relative to the overall size of the plant the flowers are huge and this is a species I am tempted to grow. Many plants bear the specific epithet formosa, meaning 'beautiful', but in the case of this orchid formosana means 'from the island of Formosa'.

Several of the gardens were growing Crown Imperials, Fritillaria imperialis. Like F. persica, I have attempted to grow this species but have failed miserably. Rather gallingly someone has thrown out some bulbs in The Twistle, Byfield, and there beneath a hawthorn hedge they bloom happily! I'll try again despite the fact that the flowers have a rather rank, foxy smell.
I could ramble on about the flowers seen but will restrict myself to one more. Not many trees are grown for their lovely bark although the Paperbark Maple, Acer griseum  is one.

Another, seen in a Flore garden, is the Tibetan Cherry, Prunus serrula. To my mind the Acer has the more attractive bark but of course with the cherry there is a bonus in the form of flowers (Acers have flowers too of course but rarely excite comment). It is perfectly hardy, but I notice that a well-grown tree will cost in the region of four hundred pounds! (Beware, there is a Japanese Cherry called Prunus serratula, so if you plan to order a few, better get the name right!)
Tony White. E-mail: diaea