What has happened to spring? After a few lovely days we have been subjected to about four days of distinctly chilly weather. Even when the sun has broken through there has been little warmth to it and we have been troubled by a nagging north-west wind.
'April is the cruellest month' claimed T. S. Eliot in 'The Waste Land'. True, he wasn't referring to these sudden setbacks in the weather but the words seem appropriate.
What on earth am I talking about? Looking back over the years I can recall snow and bitter April winds; I can recall flood and devastation, and here I am, whingeing about a short cool snap. In fact I have risked planting out Morning Glory, Ipomoea purpurea, in our back garden, and so far no frosts have arrived to dash my optimism. No, the weather isn't that bad, but recently we have been spoiled.
Despite the cool conditions I strode forth today in the direction of Kentle Wood, passing on the way some large specimens of Cherry Laurel (mentioned in my blog on 2 April).

It is a fine sight at this time of the year with its racemes of creamy-white flowers -  if you have plenty of space, Bone hardy it is, but in a smaller garden there are, I suggest, some choicer options.
Normally there would be numerous flies paying these flowers a visit, but not today and I pressed on. A little further on and a sparsely-grassed bank was being mined by Andrena bees. Their appearance, with distinctive and conspicuous grey-white hairs, showed them to be Ashy Mining Bees, Andrena cineraria. 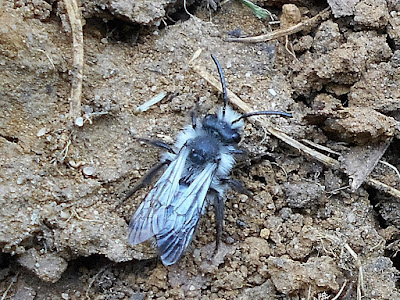 Although this insect tends to have a western and southern distribution in England, finding it in this situation is in no way a surprise and there is evidence to suggest an increasing presence in central England.
With only a quarter of a mile to go I reached Browns Road where yellow roses tumbled down a bank.
I cannot be certain what they are but I'm reasonably confident that the species is Rosa xanthina 'Canary Bird'. ﻿
﻿
The lovely yellow flowers are single and much visited by insects, making it an excellent choice for the wildlife garden.

On other shrubs at the roadside shieldbugs were to be seen. Only a couple of very common species were noted but nonetheless I was pleased to see them. Palomena prasina is, despite its green dorsum giving it camouflage on green foliage, reasonable easy to spot. No other British bug has quite the same size and coloration but, to be certain of the identification the under (ventral) side is of a pink or yellow shade.
﻿﻿

Much more boldly marked is the Hawthorn Shieldbug, Acanthosoma haemorrhoidale. Surely this would be much easier to see with its distinct green and wine-red markings, but these blend in very well with the green leaves and red berries of hawthorn, making the insect easily overlooked.
﻿﻿﻿﻿

Compared with the observations made en route, Kentle Wood held few surprises. An open area of grassland in the central area had been colonised by hundreds of Coltsfoot, Tussilago farfara, plants.
These had gone to seed and from a distance they resembled a patch of cotton grass on a Scottish moor. (Rather surprisingly Common Cottongrass, .Eriophorum angustifolium, is found a few miles away at Bugbrooke Meadow.) I did however take a large number of beetles and spiders and perhaps microscopic examination of these over the next two or three days will reveal something out of the ordinary. So far I have recorded 44 species of flowering plants and 398 arthropods (insects, spiders, centipedes, etc.) from Kentle Wood and hopefully this year the figures will swell significantly. (Sure enough, a tiny spider called Ero furcata has just joined the list. This is one of the Pirate Spiders, a group of spiders specialising in entering the webs of other spiders and then killing them as prey. )