The Pocket Park and Primulas

As mentioned on 4 March, Pom Boddington has gathered together a small team to do maintenance work in Byfield's pocket park and a short visit earlier today confirmed that the efforts are bearing fruit.
One enters from the cricket pitch to the north via a metalled track where apple blossom is bright among the elder and scrambling ivy. The origin of these apple trees is doubtful.

Remains of a small orchard, dating back to the times when Byfield railway station stood here, can be discerned but the plant photographed may, like many 'Crab Apples', simply be the consequence of an apple core casually cast aside by a passer-by. Be that as it may, the pink blossom is a delight to humans and insects.
Flowers are now appearing in abundance. Most are commonplace but even the humble dandelion should not be ignored. Certainly they are not ignored by hoverflies and the one photographed is delving deep into a capitulum in search of nectar. Of course we can eat the flowers too: according to Adele Nozedar they 'make a good addition to salads, pancakes and even jellies and trifles'. (Adele Nozedar, 'The Hedgerow Handbook', Square Peg Books, 2012) Strictly speaking these pollinating insects are not required for pollination since dandelions - Taraxacum species - are apomictic: they produce seed wholly female in origin without fertilization, with the consequence that an enormous number of 'microspecies' has evolved, with at least 235 of these currently recognised in the British Isles alone.

Their diuretic properties are well known and in French they are called pissenlit - literally 'wet the bed' and my grandmother always referred to them such, as it was also the old Northamptonshire dialect term for them. Adele Nozedar states: 'This same diuretic action helps flush out toxins, including uric acid, alleviating rheumatism and gout'. I'll bear it in mind!
Primroses, Primula vulgaris, and Cowslips, Primula veris, are both native in the area of course, but not in Byfield Pocket Park. Both species have nevertheless been introduced although, like the apples referred to earlier, their provenance is questionable. We have three other species of Primula native to Britain. They are: Oxlip (Primula elatior), Bird's-eye Primrose (Primula farinosa) and the Scottish Primrose (Primula scotica), none of which is native to our county but are all very attractive garden plants.
The primroses look perfectly authentic but the 'cowslips' may be hybrids with primroses. The colourful  Polyanthus, Primula x polyanthus, plants of gardens are such hybrids and sometimes the precise taxon to which a particular plant belongs can be unclear. (Is this why the oxlip-primrose hybrid is sometimes called the Bedlam Cowslip?) But it must be admitted that the general appearance of the plants here is that of a cowslip. The plant is common in pastures and their name is derived from the Old English cu cow and slype slime, ie cow-dung. Tellingly, one old Northamptonshire dialect word for the plant is 'cowslop'. John Clare acknowledged this association with pastures when he wrote:
The shepherd on his pasture walks
The first fair Cowslip finds,
Whose tufted flowers on slender stalks,
Keep nodding to the winds.
The pocket park needs to be kept in a tidy state and the footpaths accessible but I am pleased to note that fallen trees are being left to decay. The Elder photographed will hopefully support a number of fungi in the course of this process, adding to the interest and natural health of the habitat.
The soil disturbed in its falling will create opportunities for rapid colonisation by plants such as these Forget-me-nots, Myosotis species, whose flowers, small though they are, create a mist of sky-blue in open areas. 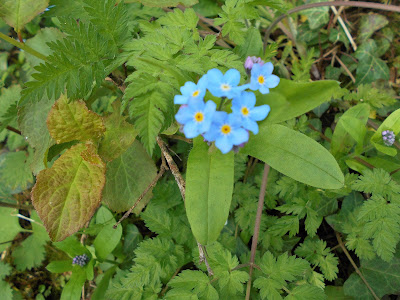