Yesterday I  took one of my regular strolls around Byfield  on the lookout, as usual, for anything new or out of the ordinary. The pocket park was my first destination and I entered via the playing fields.
Pendulous Sedge, Carex pendula, grew in tussocks beside the stream.

It is a very grass-like plant but like most (all?) sedges it has trigonous, i.e. three sided, stems that form an equilateral triangle if cut across. The flower spikes are indeed pendulous, making the plant quite graceful and very distinctive, with only one or two Scirpus plants likely to create confusion. It grew in our garden when we lived in Byfield and could be a bit of a nuisance, with seedlings liable to crop up anywhere.
I left the streamside to enter the pocket park where, almost inevitably, the Green Shieldbug, Palomena prasina, was soon spotted. It made no attempt to move from its nettle leaf as I approached, doubtless feeling secure in its cryptic coloration. Few creatures attempt to eat it anyway as, like all shieldbugs, it has glands behind the head which secrete a very unpleasant odour, clearly repelling most would-be predators.

The day was turning out to be distinctly chilly; my hands were turning blue and I counted myself lucky to see any insects at all. Only a female Melanostoma mellinum was bold enough to brave the elements. This is one of the commonest of all our hoverflies and is generally abundant, even in gardens.
It was sheltered from the biting wind by trees and it sensibly stayed close to the ground. One of the trees involved was a Sycamore, Acer pseudoplatanus. I was momentarily puzzled by pink patches on the leaves, most obvious on the underside, but then the penny dropped.  It was Tar Spot, caused by the fungus Rhytisma acerinum.
In a few weeks the patches will turn black with yellowish borders. This is a very disfiguring disease but appears to cause no long-term damage. On a nearby Horse Chestnut the flower buds were developing well and visiting bees will soon be covered with the pink pollen. So far there was no sign of the mines caused by the moth Cameraria ohridella. This insect, the Horse Chestnut Leaf Miner, also causes disfiguring patches on leaves and may cause some long-term damage. Since being first reported in this country in 2002 has become a real problem.

Pale Bramble Rust, Kuehneola uredinis, was afflicting the stems of blackberries. It is one of these easily overlooked species and I admit it creates little excitement but in recent years there has been much talk of 'mindfulness' - being aware of and appreciating the environment around us. I really believe that mental well-being is helped by this state of awareness. Someone must recommend it to Donald Trump.

Anyway, by now I had reached the edge of the pocket park. There was just time to appreciate some Bush Vetch, Vicia sepium, scrambling among grasses and low shrubs.
It is able to climb via tendrils at the end of its compound leaves and so raises itself up towards the sunlight without expending its resources on strong stems. It is very common in hedgerows and of course its specific name comes from the Latin sepes, a hedge.

My walk next took me down Bell Lane. Many interesting plants grow at the foot of a wall facing the school but lots were dead, having been sprayed - very understandably as some of theme would soon become rampant. One plant to escape the spray was Cornsalad, Valerianella locusta. I have mentioned it in blogs before as an easily overlooked plant, but one which pays close examination.
Its tiny, sky-blue flowers look vaguely like a forget-me-not but the two plants are not related. It is scattered throughout Northamptonshire and is the commonest of the five Valerianella species found in Britain.  A close look at the flowers betrays its relationship with Red Valerian, Centranthus ruber.
﻿ 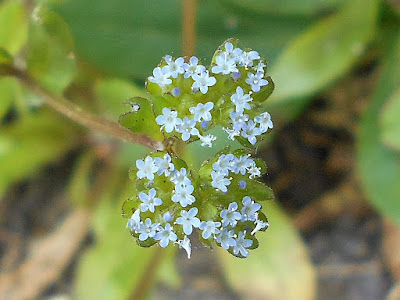 A little further on and Buffalo Currant, Ribes odoratum, was in flower. This native of central U.S.A. was introduced to the U.K in 1812 and it is not generally known that Tchaikovsky's dreadful overture commemorates this event. [Ed. You do talk rubbish at times Tony!]

The tiny flowers are fragrant and, in a good year, may be followed by edible fruit. Perhaps it should be grown more often. 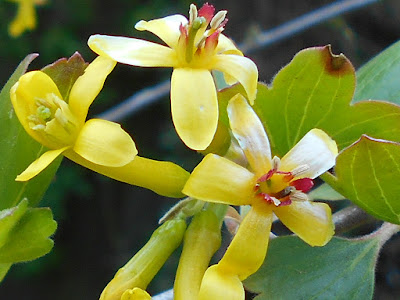 So, all in all, and given the chilly conditions, not a bad day. I gathered Chris from Julie Ferguson's house and, after a quick look at that odd member of the Poppy family, Greater Celandine, Chelidonium majus, it was back to Daventry.