My friend Angela Weller led a group of about 14 on a walk today, starting at The Cross Tree pub in Byfield, and a very interesting walk it was too.
We set off in dry, breezy but quite mild conditions, trudging south-west along the A361 before turning south-east towards West Farndon. In the summer this is a moderately interesting walk but in late February its excitements were not obvious. The land is quite high and on this very clear day the views were excellent but, tempting though it was, I refrained from photographing the landscape; I would not be able to do it justice.
The soil is slightly acid in this area and molehills showed that soil was generally dark. The mole, Talpa europaea, has a host of vernacular names, one of my favourites being Mouldiwarp. This strange name is apparently derived from the Saxon words mold werp meaning 'earth mover'. 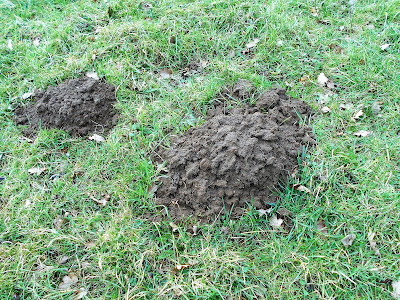 Our group now lost height as we approached the hamlet of West Farndon. The settlement only consists of about six houses and in bad weather the inhabitants must feel very isolated and yet until about the 1966 the Great Central Railway had a station within walking distance at Woodford Halse. It is an interesting area from my point of view and the summer brings lots of insect activity. Today I paused only to photograph a Rustyback in a wall crevice. The back of the fronds have a covering of brown scales, giving this little fern, Asplenium ceterach, its common name. In many works the name of Ceterach officinarum is preferred. Yer pays yer money...
We moved on, heading for Woodford Halse along a short stretch of the Jurassic Way, crossing and re-crossing the old trackbed of the Great Central. By now we had met up with the River Cherwell which, despite its spelling, is usually pronounced 'Charwell'. This is almost the spelling used by John Speed in his 1610 map of Oxford, in which he names it the Charwelle. A similar situation prevails with the names Hertford ('Hartford') and Berkshire ('Barkshire'). Anyway, as is so often the case, I find I am deviating. The river snakes its way across the flood plain at this point in a series of graceful meanders, bringing back memories of my days teaching geography.
River features I always regarded as interesting (although, sadly, students were often less enthusiastic). The bank had slumped at one point and this material will eventually be washed away leaving the meander even more sinuous.
Here and there were patches of Flote Grass, otherwise known as Floating Sweet-grass, Glyceria fluitans. There are several species of Glyceria in Britain and to be honest, as the grass was not in flower, I can only guess at the species.
We brushed the edge of Woodford Halse before setting off on the last leg of our walk across rather featureless fields. Deer tracks showed up clearly on our path and, from the shape and size of the 'slots' were almost certainly those of muntjac or, to be pedantic, Reeve's Muntjac Deer, Muntiacus reevesi. It is, I suspect, the commonest deer in the area by some distance.
And so back to Byfield, for a glass of Cross Tree Ale and a fry-up. We reckoned that the walk had been one of four and a half miles. Enough.