Chris spends a couple of hours on Tuesdays volunteering in one of Daventry's two Air Ambulance shops. I usually drop her off and then pick her up later. However, today's weather was glorious and I continued my exploration of this unassuming and, to my mind, under-rated town.
In these circumstances I tend to follow a meandering course and the subsequent blog has no real theme; it is just an aide-memoire of my observations.
My walk initially took me through a small park, looking rather tatty at this time of the year, in which stands an enormous willow, coppiced long ago and now the haunt of wood pigeons and carrion crows.

Nearby were oaks and Lombardy Poplars, the latter being known to botanists as Populus nigra var italica. This fastigiated form of Black Poplar is very familiar but only the male is grown, all specimens being clones of the original.
My walk continued through an underpass, leading to the Ashby Road. In an earlier blog I featured another underpass, the walls of which had been used for paintings of locomotives ('Tombs and Trains', 1 December, 2016) but here the theme seemed to be coastal fishing ports.

To my mind the quality was very decent and clearly discouraged the obscene and illiterate graffiti defacing similar underpasses. With the awkward lighting conditions my photographs fail to do them justice. 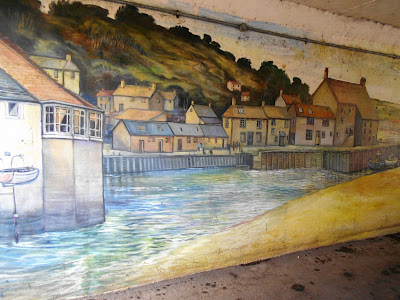 I emerged into the sunlight and was soon striding up Ashby Road, turning to the left at Falconers Hill Infant School on to a footpath. Here and there Elephant's Ears, probably Bergenia crassifolia (there are a couple of other possibilities) were in bloom. I don't deny that its pink blooms of this saxifrage relative are welcome at this time of the year but its large leaves can look very tatty for many months as they get chewed by various creatures. 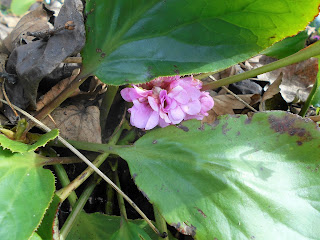 This year there have been reports of large numbers of Waxwings, Bombycilla garrulous, across the midlands. They have moved in from the north of Europe in search of the berries of rowan, pyracantha and the like.

My fingers were crossed but although suitable berries, such as those of the Fishbone or Wall Cotoneaster, Cotoneaster horizontalis, were available they were attracting little or no interest. This is a good wildlife plant as the birds will eventually take the berries, and later in the year their flowers will prove very attractive to bees, but it can be a very invasive plant and has colonised some large areas of hillside in the Cotswolds.
Although my walk had not taken me far from the town centre the trunks and branches were festooned with almost as many mosses and lichens as would have been found in neighbouring woodlands. Inevitably all were commonplace, even predictable species.

Something like half a dozen lichens were casually noted, with (probably) Hypogymnia physodes common on the trunks of roadside cherry trees. This is quite a variable species so my identification is not as firm as I would like.
It was often sharing a tree trunk with what I suspect is Physcia tenella but, as is so often the case, I failed to take a portion for examination at home. Lichens can be fascinating - but frustrating.

I had now covered a couple of miles and had yet to begin my return journey so, keeping the distinctive spire of Daventry's main church in view I began the return journey. Amazingly Yarrow, Achillea millefolium, was still in flower at the edge of a car park and, given the time of the year, one can forgive its rather scruffy appearance. My poor photograph is less forgivable. 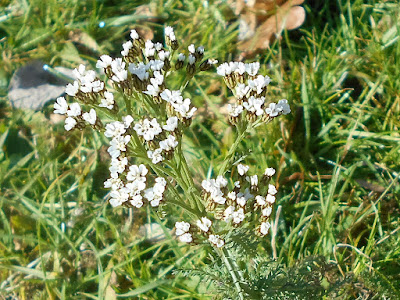