Yesterday much of Northamptonshire endured torrential rain but today dawned bright and clear. No overnight frost had been forecast so I'd uncovered my Abyssinian Banana, Ensete ventricosum, in order to let it dry out: of course it was a frosty night.
Anyway, given the fine morning and the fact that we needed bread, I took a walk to a nearby shop. I had no intention of being distracted en route by fish or fowl but my route took me past Stefen Leys Pocket Park, where drifts of snowdrops were hard to ignore.

They weren't fully open but another couple of hours would probably expose enough of the innards to tempt Honey Bees (snowdrops provide the bees with both nectar and pollen). The status of snowdrops in Britain has been much discussed and is still not fully understood and the problem is complicated by the fact that five species are now known to be naturalised in the British Isles together with a couple of hybrids. 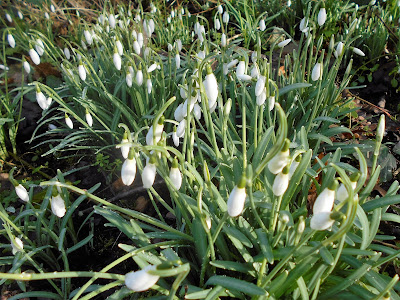 The snowdrops I photographed certainly seem to be Galanthus nivalis, by far the commonest species. A fact not widely known beyond the gardening fraternity is that an autumn-flowering snowdrop exists. Galanthus reginae-olgae is naturalised here and there and its blooming prompts excited letters to newspapers proclaiming that 'winter has arrived early'. (A similar situation occurs with regard to insects, when the bee-mimicking hoverfly, Eristalis tenax, may be seen on a sunny winter's day, provoking a flurry of letters regarding 'early honey bees'.)
I was about to resume my bread quest when my eye was caught by fungi on a nearby tree stump. The species was surely a Ganoderma but really I should have taken home a portion for a closer examination.
I did photograph the under side but this was less useful than I had hoped. The Artist's Bracket, Ganoderma applanatum, is probably the commonest species and this is almost certainly what I was looking at, but it is easily confused with G. adspersum.
Only a few days ago ('Stumped', 30 January) I was commenting on the widespread nature of Turkey Tail, Trametes versicolor, and here it was again, appearing to cascade down the side of a dead tree stump.

But enough - I still needed bread, and a few minutes later I was on my way home, to find that the sun had done its work and Crocus sieberi was in flower in our front garden, living up to its reputation as one of the earliest-flowering croci.
Posted by Tony White at 08:27