I made a visit to Byfield today and I was struck, not for the first time, by the hardiness and persistence of Groundsel, Senecio vulgaris. Although this annual flowers throughout the winter and rarely receives an insect visitor in these cold months it matters not, as it is self-fertile and one of the plants examined by me was happily producing its fluffy heads of seeds (strictly speaking, fruits).

The word 'groundsel' is derived from the Old English gund pus and swelgan to swallow, because it was apparently used in poultices for boils, etc. In Victorian times it was regarded as a useful diuretic (increasing the flow of urine) and diaphoretic (inducing sweating). Like its close relative Ragwort, Senecio jacobaea, it contains a number of potentially dangerous alkaloids but not in quantities likely to cause harm. It is often found that an apparently scruffy and unattractive plant has, when closely examined, rather pretty flowers. Sadly groundsel does not fit into that category, with only disc florets present.  In fact a specimen is occasionally found also bearing ray florets but the aesthetic nature of the flowers is little enhanced! 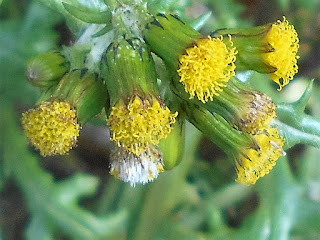 Groundsel is generally regarded as an archaeophyte, a plant which originated as an alien species but has been naturalised here since before 1500 CE. Its origins perhaps lie in Western Asia or North Africa and it may have come to this country as a crop impurity, but that can only be speculation.
The word 'Senecio' is derived from the Latin senex, an old man, and alludes to the grey and hoary seed pappus.
Until recently the genus Senecio was a huge and unwieldy group of around 2000 species but the geneticists have been hard at work and the genus is being broken up. Senecio vulgaris retains its name but Ragwort, Senecio jacobaea, is henceforth to be known as Jacobaea vulgaris; this comes with divers other changes of no direct relevance to this blog.