Goings-on in the February garden

St Valentine's Day is now behind us and the weather forecast is promising. But these forecasts can be deceitful; this is a stop-start time of the year and an all-too short string of sunny days can be brought to a shuddering halt by a sharp frost, and there is yet plenty of time for snow. I have been sowing foxgloves today, sprinkling seeds of a new variety that intrigues me - yet cautiously I'll be keeping them under glass. I have also sown Cleome spinosa, the Spider Flower as it is known. Recent DNA studies have concluded that Cleome species should be placed in their own family, the Cleomaceae.
Bright sunshine today has encouraged crocuses to show their wanton nature, gaping wide to flaunt their sex organs in the hope of enticing a passing bumble bee, but so far this year I've not been witness to any of this debauched coupling. Anyway, if seeds are produced I, like 99% of gardeners, will ignore them and rely on the multiplying corms.
My general rule has been to plant blue or violet crocuses, feeling that yellow ones would have little impact; I need not have worried. Golden-brown the gravel may be but the yellow-flowered croci stand out well enough.

The dwarf irises, Iris reticulata, are also now in flower but are rather more coy about the whole business, with the bases of the petals in this case forming an almost tubular structure concealing the pistil and the stamens.
The three lower petals - the falls - bear a 'signal' of golden-yellow leading a bee to the reproductive structures where it will receive its reward of nectar and depart with a dusting of pollen. 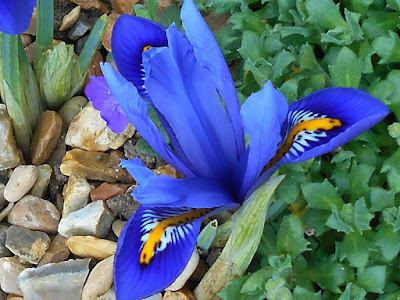