The Garden in May

By and large our garden is managed with insects in mind. Chris likes a neat and tidy garden and I'm happy with that although I look for the unusual and occasionally bizarre. The consequence is that plants can sometimes be awkward to place.

Take Lamium orvala. This sombre-flowered dead nettle is not everyone's cup of tea but it is not often seen and is a very good bee plant. Sometimes called the Balm-leaved Archangel, it forms a trouble-free clump in the border and flowers for several weeks. It is native to eastern Europe where it is found in open woodland. The Yellow Archangel, Lamiastrum galeobdolon, is a popular but invasive garden plant, usually grown in its variegated form.


Clematis is a genus within the buttercup/anemone family. The relationship is not always obvious but we have a pretty, white-flowered species, Clematis cirrhosa, which clambers through a section of trellising. 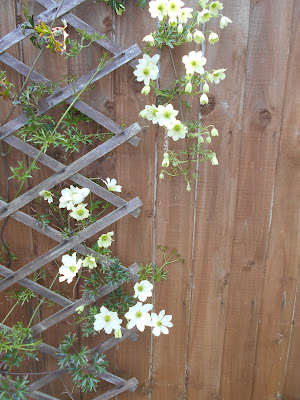 With flowers barely two inches across and much simpler than some of the brightly coloured hybrids
available, it is steadily spreading each year but is never likely to become a problem.

Oxalis 'Ione Hecker' is flowering well for its second year. It is a hybrid and apparently never produces seed.

I was therefore astonished to find a tiny Oxalis seedling about six feet away. I can only assume that it from my plant of Oxalis adenophylla, but chance seedlings like this are most unusual.

Not at all surprising were seedlings from a plant of Fairy Foxglove, Erinus alpinus, planted last year. The species, from the mountains of south-west Europe, is very commonly grown and has widely naturalised itself in Britain where it may be found on walls and in stony places.
.

Although looking quite unlike a foxglove it is in fact quite closely related, despite being under two inches high. I was taken aback when I counted some forty plants scattered around the parent. I'll need to be ruthless and take a lot out!