Oliver's garden is always full of interest with some very attractive plants to be seen. His 'meadow' is currently bright with primroses, cowslips, fritillaries and narcissi in full bloom; orchids are pushing through and will add to the display later in the month. 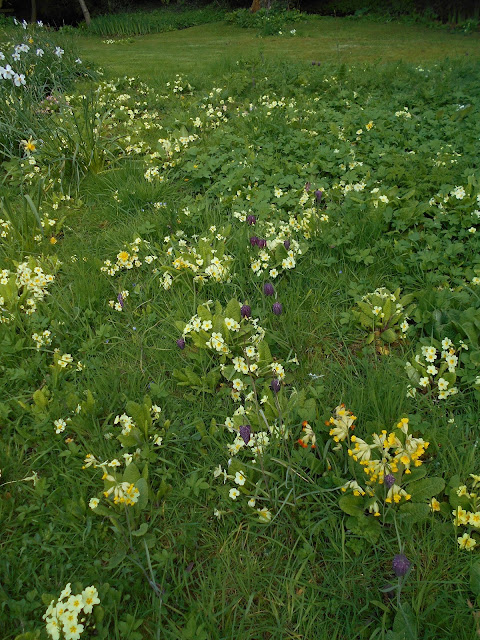 I had little time to spend enjoying the procession of insect visitors to this area as I had promised to lend a hand with the re-potting of some viciously-spiked agaves but my eye was drawn to a Spotted Laurel, Aucuba japonica, in flower. It is an odd plant and, in its time, this ubiquitous shrub has been placed in various plant families including, surprisingly, the Garryaceae, Normally however it is regarded as a member of the Cornel Family, Cornaceae. 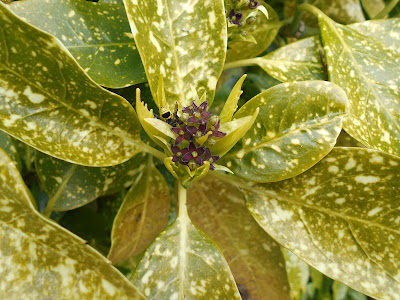 Its flowers are inconspicuous, being a purple-brown or even chocolate, certainly nothing to set the pulse racing. I photographed it and then examined my results. 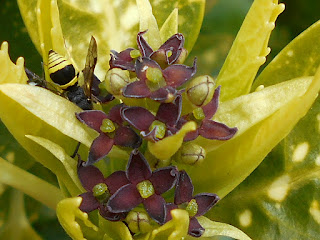 I was rather taken aback to realise that I had completely overlooked an insect at the top left of the flower cluster. It is clearly one of the solitary wasps. These are not my thing and are a job for the specialist but it appears to be one of the Potter Wasps such as an Odynerus species - but that is as far as I am prepared to go. Bugs, flies and spiders are quite enough to keep me occupied!