A good day for beetles

Chris was going out for lunch with our daughter Jacqui so I resolved to visit Kentle Wood.


Prior to departing I had a quick look at out giant Cardoon, Cynara cardunculus, plant. Its magnificent thistle-like flowers attract hordes of insects in the summer but occasionally insects are to be found on the leaves.


Today it was a Tortoise Beetle, i.e. a species of Cassida. In the U.K. here are twelve species found and a little care must be taken with identification. This specimen turned out to be Cassida vibex, widespread in southern Britain but less common further north.


﻿
So, not a rarity at all, but a pleasing start to the day.

The sun was now gaining strength so I packed my gear and set off for Kentle Wood.

I immediately spotted a beetle basking on a dog rose leaf and recognised it as Cantharis nigricans.  As with the Tortoise Beetle we have a dozen or so species of Cantharis in the U.K but keys to identify the species are readily available.
﻿

If disturbed these 'Soldier Beetles' are quick to drop to the ground, where they can be difficult to find. This is true also of the Cardinal Beetles - my next find. The species in this case was Pyrochroa serraticornis. and it can be recognised by the scarlet - not black - head and the distinctive serrated antennae. The bright red coloration warns would-be predators that it is toxic to eat, but as a precaution it not only drops to the ground when disturbed but, in my experience, falls with the underside uppermost.  This ventral side is black, making the beetle well-nigh impossible to locate. There it lies for, perhaps, several minutes before moving. The feigning of death - 'playing 'possum' - is a widespread strategy within many animal groups. Known technically as thanatosis it is clearly successful and must have led to the survival of countless millions of creatures.


The edges of the rides have now developed a foaming mass of Cow Parsley, Anthriscus sylvestris, in many cases with a background of creamy - and very fragrant - hawthorn blossom. 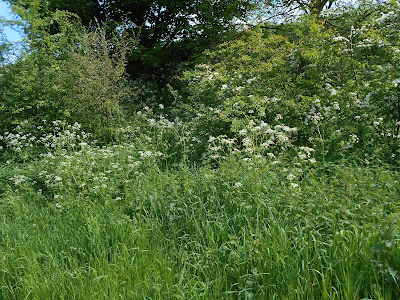 Neither of these plants was attracting noteworthy insects but the understorey of White Dead-nettle, Lamium album, was receiving plenty of attention from various species of bee. 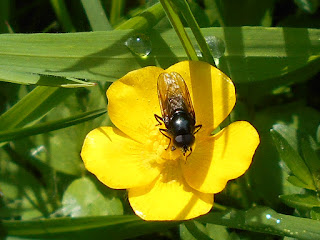 Buttercups too were getting visitors, largely from the fly, Cheilosia albitarsis. Fortunately the specimen I photographed was a male; the females are indistinguishable from those of Cheilosia ranunculi. Both species are found commonly on Creeping Buttercup and the former certainly lays its eggs at the base of the buttercup stem.


At this point I put my camera away as I planned to spend an hour or so investigating the spiders found in grass tussocks and vole runs.


Not situations likely to throw up photogenic material!