The clock on the church tower said 2.30 so there was time for  quick look around before kick-off in the England v Wales rugby, being shown at the village pub, The White Horse.

The Church of All Saints is very old, with the porch dating from the 13th century, but a legend claims that St Patrick hails from the village, so Christianity hereabouts goes back much further. (It seems that religious fervour is still intense here: twice I heard someone shout 'God help us' when watching the rugby.)

The church is an unfussy building and is fairly typical of the area using, as is often the case, the local Jurassic marlstone for the masonry. Most of the churchyard is carefully manicured and of limited wildlife value but around 250 square metres at the back of the church has been left to revert to nature and would have repaid further attention.

Brambles and nettles were dominant but Woody Nightshade aka Bittersweet, Solanum dulcamara (dulcis sweet; amara - bitter), was present, as was hawthorn:

Nearly kick off time. Just time to photograph the headstone of the unfortunate Emily who, once married, became Emily Emery - try saying that after a couple of pints! 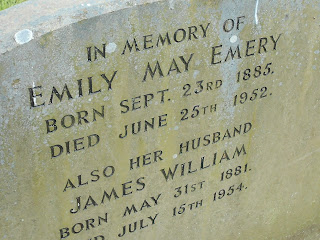 England triumphed but I'll gloss over the details in case any Cambrians read this blog.