On 15th May I went with friends to Borough Hill (see blog) but came away vaguely dissatisfied. I recorded 6 spider species, 11 diptera (two-winged flies) and 12 other invertebrates but I knew that this represented a paltry haul given the nature of the habitat.


Today I returned, resolving to do a little better. The weather was fine and I felt very optimistic as I set out. The hawthorn bushes in the hedgerow were heavy with blossom and the hillsides were studded with sky-blue patches of Common Field Speedwell, Veronica persica. (As children we always called it simply Birdseye.) G.Claridge Druce, in his 1930 flora of the county describes it as 'ericetal', i.e. growing on acid soil where Erica (Heather) might occur. Certainly the soil on Borough Hill is a bit on the acid side.

They seemed to like the sandy soil of ant mounds and many of these hillocks seemed to be wearing a blue cap. There are over twenty species of Veronica found in Britain, including some introductions, but with care they are not difficult to separate. Incidentally, these ant mounds were significant for I took a specimen of the hoverfly Xanthogramma citrofasciatum, whose grubs feed upon root aphids 'farmed' by the ants. 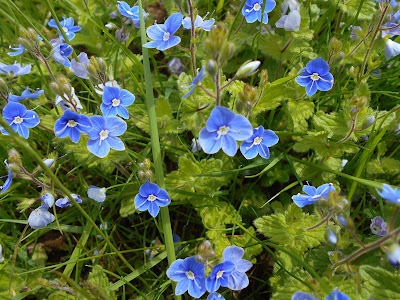 It wasn't long before I was encountering interesting species.

Agapanthia villosoviridescens is one of the Longhorn Beetles and its grubs feed in the stems of thistles. With a body length of up to 22 millimetres (my specimen was a mere 17 mm) the long specific name seems apposite but for once the 'common' name is even longer - The Golden-bloomed Grey Longhorn Beetle. On the photograph the golden hair on the elytra (wing cases) can just about be made out. This species seems to be confined to central and eastern England.
Spiders were not particularly conspicuous. As usual, Nursery Web Spiders, Pisaura mirabilis, were prominent on leaves but seemed to be having little success in seizing prey. However this crab spider, Xysticus cristatus had got her lunch in the form of a sawfly of some sort.

They have powerful jaws and the male must exercise caution when mating. He will walk around the selected female trailing web and thus pinning her legs to the ground. She is helpless while he has his wicked way with her but she will eventually extricate herself - by which time the male has scarpered.
Most people will be familiar with black millipedes and they may also know the Striped Millipede, Ommatoiulus sabulosus. In his monograph on British millipedes J. Gordon Blower writes: '...it is associated with sandy soils...and heathland' (sabulose means 'of sandy places') so it is to be expected at Borough Hill. I found several specimens.


I finally called it a day and returned home with a pot of money spiders. Their average length is about 2 millimetres so I have a lot of microscope work facing me.