We are currently enjoying a spell of unseasonably mild weather but only a few days ago we had a sequence of very frosty nights. The consequence of these frosts was that several species, which up to that point had been looking very attractive, took a nasty knock. Flowering nutmeg, Leycesteria formosa, had, on 17 November, still been splendid.
﻿

Now it is looking forlorn, its inflorescences shrivelled and almost black. This would be a good time for fairly heavy pruning as it is a shrub which quickly produces new and vigorous growth.

Stag's Horn Sumach, Rhus hirta, has been affected in a different way, but the results have been equally drastic. In this case it is the leaves rather than the inflorescences which have suffered. In the middle of last month the foliage was ablaze with orange and scarlet.

Now the branches are bare, but it does allow one to examine the twigs and note the rather furry appearance, rather like a stag's antlers when 'in velvet' and giving the shrub its popular name.
But out with the old and in with the new. There is already promise of things to come. There is, for instance, good old Laurustinus, Viburnum tinus. It is not spectacular but it is so dependable. '...there is a steady consolation in the firm, robust, rather hard and bright cheer of its coral buds and snowy white blossoms', wrote Helena Swanwick in the Manchester Guardian (as it then was) in December, 1918.

It may be lacking in fragrance but, come wind or snow, it is there. A Boris Johnson of a plant - reliable, dependable...
﻿
One drawback is that, in recent years, many specimens have been ravaged by the Viburnum Leaf Beetle, Pyrrhalta viburni, and this can be very disfiguring. 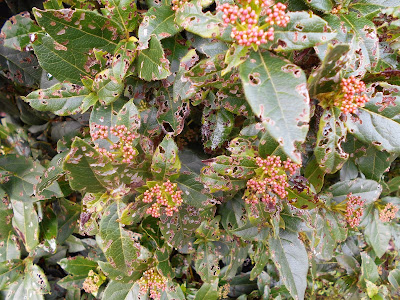 Another Viburnum is currently in flower. Viburnum x bodnantense is one of our most popular winter-flowering shrubs with its clusters of icing-pink flowers. These are, theoretically at least, fragrant, but it frequently blooms in very cold conditions and I often cannot detect the scent.
﻿

It is a hybrid between Viburnum farreri and V. grandiflorum and was developed at Bodnant Gardens in North Wales.

Allowing myself to drift off-topic for a moment, a Rowan tree nearby was covered in bracket fungi. A closer look suggested that it was the Hoof Fungus, Fomes fomentarius, but I couldn't obtain a fragment for a closer look. It will inevitably lead to the death of the tree.

Now, where was I?
Mahonias, in various forms, give us flowers through autumn and winter, going on into spring. They are fragrant and much visited by bees - except in winter. They are closely related to the genus Berberis but differ in having flowers in racemes and leaves that are pinnately compound. The specimen I saw today was probably Mahonia japonica but M. bealei is almost identical and some authorities regard the latter as just a form of M. japonica. Whatever the name it is a lovely , very fragrant too and, had I a larger garden it would certainly find a prominent place in it.

So, we are approaching the shortest day but there is much to be seen and no doubt certain bulbs and corms are stirring in preparation for flowering early in the new year.
Posted by Tony White at 04:16